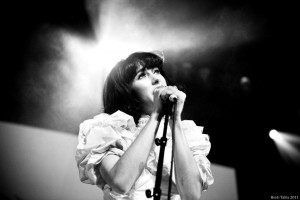 2011 was a big year for Kimbra which was rounded out quite nicely by picking up the ARIA award for Best Female Artist in Australia.  It was also a jam packed hard working year too.  There was the release of the album Vows (in Australia and New Zealand), the accompanying single releases ‘Settle Down’, ‘Good Intent’ & ‘Cameo Lover’, the sell out solo tour and many many festival slots.  Not forgetting that, Kimbra also features on a little low key number with Gotye called ‘Somebody That I Used To Know’, which at the time of writing this has now hit #1 in the UK.

For 2012, Rolling Stone Magazine has just awarded her as the ‘One To Watch’ (she was on our watch list for 2011) and Kimbra has been confirmed as a showcasing artist in March for SXSW in Austin, Texas.  It’s a massive opportunity to spread the tunes of Kimbra across the globe and it couldn’t be timed any better following the solo success she’s had in Australia and New Zealand, together with featuring on Gotye’s global smash.

We did a Q&A with Kimbra before she heads out to the US to see if she’s managed to catch her breath from 2011 and to see what else 2012 has in store:

Is there any one moment that you can look back on in 2011 as a ‘pinch yourself’ moment during the year or has it all been one fabulous ride so far?

It’s definitely been a fabulous ride and the best moments are probably the personal connects I get with people after shows.. hearing how the music has resonated with them – that means a lot. But also getting to work with people I have so looked up to as I was growing up. Van Dyke Parks (string composer for Silverchair, The Beach Boys, Joanna Newsom etc), Deantoni Parks (drummer for The Mars Volta) and producer Greg Kurstin (the Bird & The Bee) have been amongst the highlights.

Have you managed to find any time to take a breather before the big push for world domination in 2012?

I read a lot and listen to podcasts, it’s good to be able to switch off the music world from time to time, and I try to put time aside for contemplation and quiet times as they’re such a rarity nowadays. I really treasure my one on one times with friends as well so I try to make time for that when I can.

How does it feel to be playing SXSW in Austin, where some of the big names in the music industry have showcased and been keynote speakers over the years?

It’s really exciting. I’ve heard so much great stuff about Austin and of course the festival. I can’t wait to check out all the bands, I’m bound to discover lots of great music I’m sure!

You were announced in the 3rd round announcement of SXSW showcasing bands back in December.  When did you find out that you had been officially listed to play? (We saw that some acts only found out the very day the full schedule was released & some even found out on their Twitter feed from fans)

I was told by management a couple of weeks before the announcement and it was a real buzz. The best part is finally being able to bring my band over as well as this will be our first live together show in the US and I can’t wait to showcase the live experience for our fans.

Are you going to be able to mix business with pleasure at SXSW and catch any conference sessions and gigs when you’re there or will your working commitments mean it will be a fleeting trip to Austin?

I think we’re there for about a week so I’m sure I’ll get to catch some of the conferences! It’s an interesting time to be keeping up with the business side of the industry – it’s always interested me, the ways in which labels now have to adapt, so I’d like to learn more about it.

Which bands on the schedule will you be trying to catch?

What did it feel like to get your track ‘Good Intent’ featured on a  recent episode of Grey’s Anatomy?

I haven’t actually seen it yet! But it was awesome hearing about it, I’ll have to check it out….

You collaborated with Miami Horror on the track ‘I Look To You’ and with Gotye on ‘Somebody That I Used To Know’.  Are there any plans for future collaborations going forward?  If not, who would you like to collaborate with in the future?

There are so many people I would love to work with. From artists like Bilal to bands like Battles. I think collaborations are an exciting way to progress as an artist. I had the chance to work with John Legend recently in America and there are definitely some more collaborations in the works 🙂

My album, ‘Vows’ comes out in America around May and I’ll also be supporting Gotye with my full band all around the US throughout March and April! It’s gonna be great fun as it’s our first time touring the States.

For the full list of dates for the US tour (including her freshly announced supporting slot for Foster The People) plus where you can get your hands on her tracks, check it out here! : www.kimbramusic.com

2 thoughts on “A Catch Up With Kimbra: SXSW Music Interview”