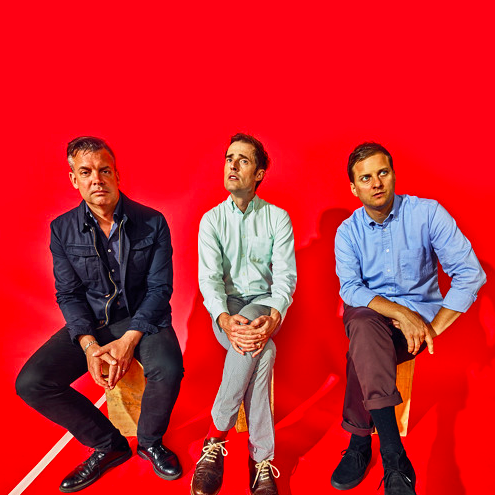 Whilst Battles played their gig at Max Watts in mid-February and it is now early May, it may appear as though I haven’t necessarily been bang on in terms of punctuality. Or so it would seem from the outside looking in. What it actually is is a homage to the ongoing living debacle that is public transport in Melbourne. Oh yes, on this particular evening we had it all; a ludicrously inaccurate phone app, random train line closures that came into operation 24 hours earlier than previously indicated, buses that failed to show up, buses that showed up late and failed to stop and then the final ignominy, trains that are described as “express” yet stop at every station. Not to get bogged down in the semantics of the word “express”, but I thought that it would have something to do with arriving in a shorter time than what would be otherwise expected. Two and a half hours to travel fifteen kilometres wouldn’t even be the definition of the word of “express” amongst people who have the most repressed sense of pessimism. Whilst Mandela overcame seemingly insurmountable odds to be released from prison, played a major role in ending apartheid, led his country back into the international community through his presidency and picked up a Nobel Peace Prize along the way, even he would have been hard pushed to negotiate a way through this disaster, wrapped in a calamity, inside a fiasco. Anywho, long story short-ish, any hopes of seeing either of the support acts (whoever they might have been) was quashed, much like any faith in the smooth operation or belief in any degree of competency in the management of public transport in Melbourne on this faithful February soiree.

Somewhat appropriately after all of these battles, it was actually time to watch Battles. From quite a distance back from the stage however, as 99% of the attendees had somehow managed to arrive more than 3 minutes before the band was due to come on stage. The venue was packed and they were in for a treat as Battles live, much like a pikey reaction is a hell of a thing indeed. In one way it is like modern art; you aren’t exactly sure what is going on, how it is being done or what it is meant to represent, but you are in awe of how good it is. Unless that art happens to be a Spencer Tunick photo shoot, in which case it is bunch of somewhat disturbing fat, hairy bicycle parking aides sprawled all over the streetscape. For me personally that is not art, it’s just an exercise designed to test the ability of your gag reflex to keep your lunch down.

As the hurdy gurdy (sans monkey in smoking jacket) / jack in the box hybrid intro ground on, Dave Konopka slowly made his way onto the stage where he proceeded to spend the next 5 minutes or so putting together an elaborate set of loops and effects. Shortly after, he was joined by Ian Williams who went through a similar sort of thing. At this stage there was no sign of the drumming beast that is John Stanier. What was being done so far was the building up of layers. Much like those freakish multi-coloured jelly desserts wheeled out on trolleys at yum cha, there was a lot going on. And this was just the intro to Dot Net; the aforementioned drumming machine had yet to join the fray. When he did however, the performance moved up another level in the exact same way as a soufflé doesn’t when the oven door is opened midway through baking.

It is difficult to imagine anyone else filling in the drumming seat for Battles apart from Stanier. The role of the drummer for Battles is incredibly physically demanding and Stanier’s shirt after two minutes of Dot Net is a testament to this. If the shirt was wrung out over a California reservoir at this point in time, there is a very good chance that the drought would end. The speed and precision with which he operates is phenomenal, almost like Neo in the one and only Matrix film that was most definitely not followed up by any sequels whatsoever.

Whilst Stanier is purpose built for the role, Ian Williams is more the jack of all trades, effortlessly flicking between guitars, dual keyboards and a laptop containing a cornucopia of software and sequencers. Most of the time this is simultaneous and all of the time it is awe inspiring. Humans should not be able to do multiple things at once, let alone combine them seamlessly into a complex and involved math rock jam. Humans (well males at least) are by rights limited to doing one thing in a relatively co-ordinated manner at once. Any more than this and you are flirting with disaster in a highly visible, most likely high public manner as this is generally the way these things happen.

Whilst Williams does a lot, there is a thing that no one in the group will touch and that is vocals. There is recognition within the group that none of them can sing and that attempting to do so will detract from a technically perfect performance. If only Bob Dylan had of come to this realisation somewhere at the beginning of the 1970’s, the world would have been left with a series of amazing recordings rather than a growing number of concert goers trying to work out it exactly what the hell he is murmuring about in some sort of terrible variation on Tibetan Monk throat singing. No, Battles have wisely caved into the much more sensible option of reverse karaoke for their two most well-known songs Atlas and Ice Cream.

Whilst there is no question that a Battles set is amazing from a sound perspective, it is equally impressive as a piece of theatre; watching how all of the various parts of the performance come together without the assistance of any lyrics. There is no way that a 3 piece should be able to create the stunning output that they do yet Battles, much like other amazing instrumentalists The Dirty Three do and do it every time they take to the stage.