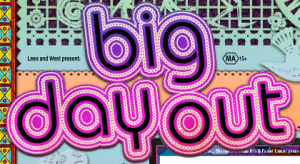 Well, the first half of the Big Day Out line up is out….but is it really that ‘big’ though? We’re not that sure…

Yes, the headline acts of Kasabian and Kanye West are pretty special but there’s a few bands on that list that are a bit unspecial too.  We’re not ones for posting negative comments here but we did kind of look at the list and go…is that it?  Hopefully there are some more great names to be announced that makes the line up a little better, otherwise there might be a lot of sideshow ticket buyers instead (unless they do the ‘no sideshow’ trend).

The big questions!!!  Will this one sell out or not? Will there be any streaming YouTube deals struck up with sponsors ‘Coachella’ style? Will there be sideshows?   We shall all have to wait and see.

In the meantime, check out the current line up so far and let us know what you think….hopefully it’s just us being grumpy at the line up and you will all embrace the line up list.  Either way, we are definitely stoked that Röyksopp have confirmed that they’re coming back to Australia as it has been a long while inbetween trips.  All digits crossed for them to do a mighty fine sideshow in Melbourne as that would be a special kind of gig.

Check out the official Big Day Out Site here