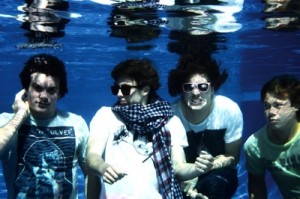 If you went to see the fantastic Amy Meredith on their recent Australia tour, you may have caught Bridgemary Kiss who were one of the great supporting bands.  They’ve just put out some demo tracks that they’ve been working and I’d recommend that your give them a listen.The Aussie four piece band recorded most of these tracks live at The Pink Room (their own Studio) with the exception of Cut That Bitch Down and Snow White Tan.

These guys have an early Arctic Monkeys and Cast sound (the best bits of both of course) that really shines through on these demo tracks.  The lead singer has some John Lennon like qualities in his voice too.  I’m looking forward to watching these guys on their magical musical journey and to where these guys are headed.  I also can’t wait for their future EPs and tracks when they come out.

We’ll keep our eyes out on for their next tracks, tour and live slots in Melbourne.  Watch this space!!!

In the meantime, I’d check out these demo tracks that they’ve posted through the wonders of Soundcloud:

The BMK Demo’s by Bridgemary Kiss