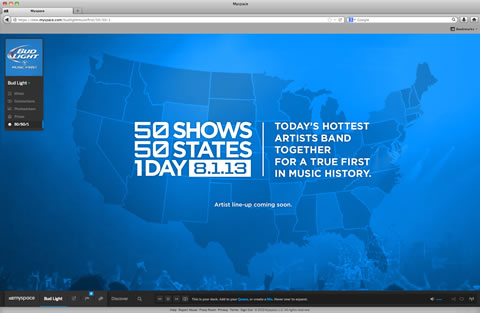 Bud Light launches Music First, a summer long celebration of music culminating with concerts in all 50 US States on one day.  Bud Light has partnered with Live Nation, Myspace and Universal Music Group on a first of its kind program.  The artist lineup features Kendrick Lamar, Sublime with Rome, Alex Clare and The Flaming Lips to name just a few.

Bud Light Music First will culminate on Thursday, Aug. 1, with “50/50/1,” a never-before-seen live music event that will see Bud Light present one concert in each of the 50 states on a single day.

“Music is such a unique platform because it brings people together, yet everyone interacts with it on a personal level,” said Rob McCarthy, vice president, Bud Light. “With Bud Light Music First, we have an amazing collection of artists and partners that will make sure every adult fan can experience music in a fun, interesting way this summer.”

Fans can become part of the Music First experience by downloading the Bud Light Music First app, which is now available through the Apple and Android app stores. The app will be music fans’ primary destination to score Bud Light Music First prizes, including Monster DNA Headphones, Live Nation Concert Cash, Universal Music Group (UMG) music downloads and 50/50/1 concert tickets throughout the summer. Adults can enter codes found in specially-marked packages of Bud Light, Bud Light Lime or Bud Light Platinum into the app for a chance to instantly win a Music First prize. In total, Bud Light will give away more than 500,000 music-centric prizes this summer. For more information on prizes and how to enter, including how to play without making a purchase, see the Official Rules at www.BudLight.com/MusicFirst. 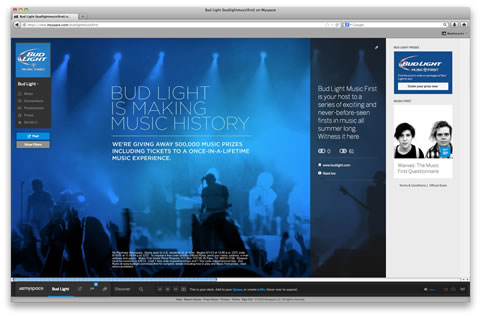 Bud Light has also partnered with Myspace to build an interactive home for the Music First program. The Bud Light Music First Myspace hub, located at https://new.myspace.com/BudLightMusicFirst, offers fans a single destination on the newly redesigned platform where they can receive updates on concerts, connect and listen to 50/50/1 artists and download the Bud Light app via iOS and Android mobile devices for a chance to win tickets to shows in their town or redeem prizing directly from their desktop computers. The Bud Light Music First Myspace hub will also house a series of exclusive interviews with artists who will each share stories about their own personal music firsts and livestream select 50/50/1 concerts on Aug. 1.

“We’re excited to partner with Bud Light as the Music First initiative gives fans the opportunity to connect to music on a massive scale, tapping into Myspace’s platform as a destination for 50/50/1,” said Christian Parkes, global vice president of marketing, Myspace. “Like Myspace, Bud Light shares the desire to create unique experiences in music and provide fans greater access to their favorite artists.”

Bud Light Music First’s finale, 50/50/1, will feature an eclectic lineup of artists from around the globe. Bud Light unveiled the first 26 50/50/1 artists, including Kendrick Lamar, Sublime with Rome, Alex Clare and The Flaming Lips. The 50/50/1 concert series was created in partnership with Live Nation Entertainment.

“It’s not uncommon for fans to travel cross-country to see their favorite acts perform at summer music festivals, but we’re turning the traditional festival concept on its head by bringing the show to everyone,” said McCarthy. “With one act playing in each state, the entire country will have the opportunity to be part of Music First’s 50/50/1 experience.”

“Music is a uniting force in our culture,” said Russell Wallach, president of Live Nation Network. “Through the Bud Light Music First program, we are able to bring together an entire nation, for the first time, in celebration of live music. There’s no doubt it will be a summer to remember for fans across the country.”

The other music acts confirmed to perform in 50/50/1 include:

Additional acts will be announced in the coming weeks. The 50/50/1 lineup is being curated by Live Nation. 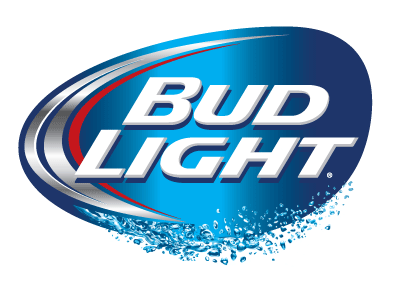