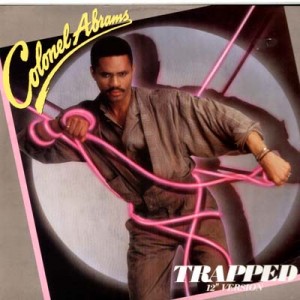 How old are you?  Well, depending on your answer you’ll either remember the track ‘Trapped’ by Colonel Abrams or it will be before your time.  Either way, keep reading on as the reworking of this track by Mickey is gold!!!

Looking at the original cover for 12″, the Colonel was into his mo’ and some quality fluorescent tubing that he was indeed trapped in.  The original version of this track was a good thumping disco/house track for the eighties that was a quality track a the time and hasn’t aged too badly.  If you enter the rework by Mickey into the equation, you’ve not only got a timeless classic but you’ve got a track that seriously works into 2011 and beyond.

A good rework/re-edited track makes you question what is different from the original version and the tweaks, nips and tucks that the Mickey rework has given us has definitely brought us a true gem of a mix.

I’m sticking my neck out by bringing this track to you as you could listen to it and think it is mid Eighties tosh that wasn’t worth the rework.  However, the I’m betting that like me, you’ll listen to this and think that this re-edit is as good as any touch up mix that Danny Krivit or Todd Terje has brought to us in the last decade.

A round of applause to the Mickey Rework for bringing us something quite special indeed.

Check it out below here…and make sure you turn it up!!!