“A singlet, a singlet, my kingdom for a singlet!” would have been the immortal line cried out by Richard III if he hadn’t died over 600 years ago and for some reason chose to attend Future Music Festival. The only things that he potentially would have added would have been some fake tan and possibly some ill-considered tattoos involving deeply meaningful script or some sort of floral arrangement. Apart from that, King Rich would have been down with kids and cutting sick in a way that only a medieval hunchback could.

Yes the long hard months of smashing both weights and ‘roids had finally paid off and Future had finally come around. It was rumoured that David Attenborough was going to make a special guest appearance in order to commentate of the elaborate courting rituals of the alpha males of the tribes, but sadly this was not the case. Preening was very much the order of the day however. But when you actually look beyond this, Future Music Festival is actually quite a handy festival with a very fine lineup indeed.

First up was Pharrell, whom you may or may not be aware, has this Dudley Do-Right hat. Ahem. He was only on stage for half an hour and as such churned through an extensive catalogue of songs that he had something to do with. Amongst these was Hot in Herre by band-aid wearing luminary, Nelly. Remember him? No? I probably wouldn’t go out of my way to change that. But aside from that, he did played some N.E.R.D, which was an excellent result for all involved as well as Drop It Like It’s Hot, Get Lucky and Happy. Blurred Lines however did suck away my will to live.

Next was Cut Copy who would have definitely benefitted from a later time slot. No doubt that the music was great, but there was no one there to watch it and thus ended up creating a “if a tree falls in the forest and no one is there to hear it etc etc” type scenario. There is also something profoundly disappointing about a light show in the middle of the day. Given the heat however, unfortunately the water cannon got a bigger reaction than the band in much the same way as it wouldn’t in Ukraine.

Whereas the crowd for Cut Copy was sparse at best, the same could not be said for Macklemore & Ryan Lewis. And they certainly weren’t disappointed with the full brass band intro, Thrift Shop, Same Love et al. Macklemore even tried to push the marriage equality barrow, but unfortunately Australia had already made their choice and elected a vile, narcissistic, condescending, misogynistic, homophobic, xenophobic, greedy, loathsome gargoyle. Although it is not his fault (it is the fault of the carbon tax), He also happens to have big ears, much like a Large-eared Horseshoe Bat, except thoroughly more repulsive.

Tinie Tempah was adored by a massive throng of geezers / ex-pats and more than lived up to his billing. Saying that the Sydney crowd was nowhere near as good was always going to help win over the gullible local fans regardless of its veracity. Turns out that it was not really needed as the evolution of Dizzee Rascal and Wiley seemed to be holding the court quite admirably without it.

And then came what turned out to be a monumental error of judgement that I will put down to hunger. After becoming somewhat / completely discouraged by the size of the queues outside of the fairly decent array of food vans, I decided to venture outside and see what the greater Newmarket area had to offer by way of food. I was however prudent and consulted a nearby security guard as to the availability of passouts. He assured me that everything was in fact tiptop and there wouldn’t be any problem at all getting back in. Turns out that I misunderstood what he meant by “no problem at all getting back in”. Unlike the interpretation likely to be employed by many a layperson, this statement actually meant not I would not being able to get back in at all. A slight difference, but a relatively important one in the grand scheme of things. Regardless, it did give me a chance to visit Bulsho Café which is a great little Somali place on Racecourse Rd. The menu is non-existent as was the clientele but their bits of some sort of meat and vegetables on injera bread with a green chilli paste was very, very good. If you wanted anything that wasn’t that, you could have been in a spot of bother, but I did not, so I was fine. Although it isn’t quite as good as Gibe in Dandenong, it was still a pretty amazing feed for $10. 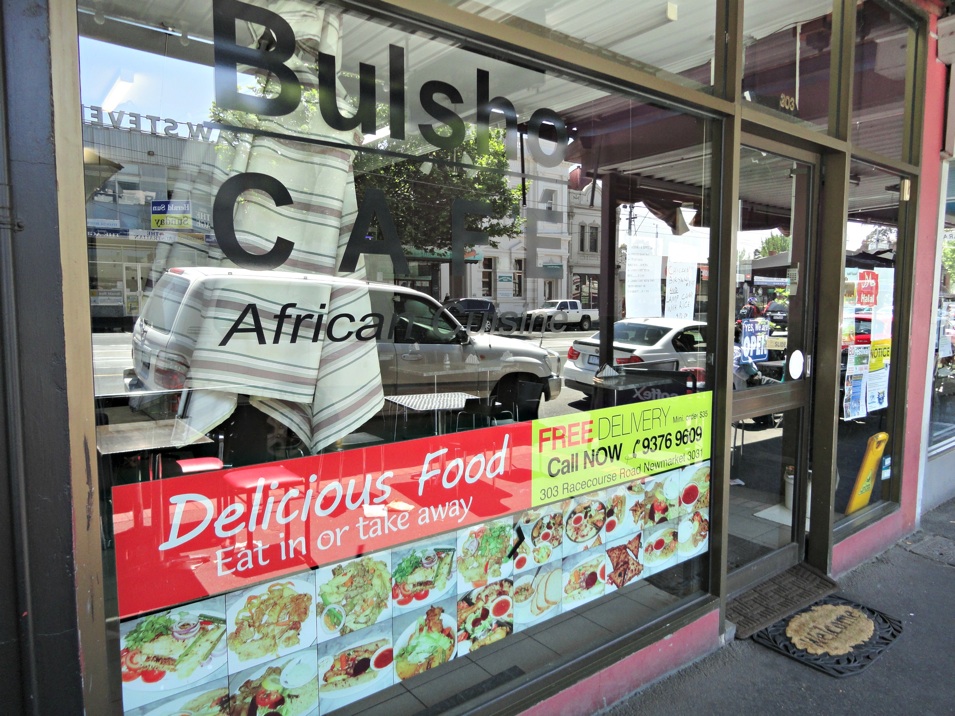 Anywho, after inhaling dinner I then set out to return to the festival. It was at the time when I reached the turnstiles that I realised that there may be a problem. This indication arrived in the form of a flashing LED sign that displayed gleefully “No Passouts”. Now I am no expert here, but I think probably a far more appropriate place to locate said sign would have been inside the festival grounds so that the relatively uninformed patron has everything they possibly need to make a decision, rather than relying on the advice of a muppet wrapped in high viz. This somewhat complicated the process of reviewing Rudimental, Phoenix and Deadmau5, so I will just have to make stuff and hope that you, much like me, were not actually there.

Rudimental came on stage and played some music. Possibly of an electronic nature. I assume the crowd enjoyed it and everyone was happy. Well everyone except those poor unfortunate souls who were not able to get back into the venue. They were mildly irritated. Same thing could be said of Phoenix and Deadmau5. Those who stuck around to watch Phoenix had the added advantage of enjoying the experience whilst not being at Festival Hall, which has to be a massive win in anyone’s books. I am sure there is a worse venue in the world in which to see live music; but I am yet to encounter it.

All in all, Future was a success, big crowds, great weather and more importantly some great acts and performances to ensure that Future remains a firm favourite on a festival calendar that has undergone a Genghis Khan-esque fit of pillaging over the last few months. Vale Harvest Festival and lack thereof of Massive Attack…