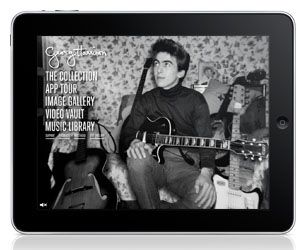 BANDWDTH Publishing, in conjunction with the George Harrison Estate, has announced the release of a special iPad app celebrating the guitarist and his historical guitar collection. The Guitar Collection: George Harrison iPad app will be released through iTunes on February 23, two days before Harrison’s birthdate.
The app brings George Harrison’s private guitar collection to life through photographs, detailed descriptions, audio, and video footage. For the first time, with the help of unique 360° imaging by photographer Steven Sebring, fans can see the scratches, dings, and worn threads on the guitars as if they were themselves holding the instruments.

Fans will be able to examine Harrison’s private guitar collection, through personal audio recordings from Harrison himself as he introduces many of the guitars and plays sections of songs.

The history of each guitar is laid out in great detail; including the origin of the guitar, when and how it became part of Harrison’s collection, modifications he made to it and why each was so important in creating his distinctive sound. Songs from his catalogue are organized by the guitars used on each track, which allows the user to appreciate the personalities of each instrument.

The video section of the app contains footage of Ben Harper, Josh Homme, Mike Campbell, and Dhani Harrison each playing and showcasing the guitars and exploring their feel and tone. In addition, Conan O’Brien and Dhani discuss what make these guitars so exceptional.  Also in this section, guitar great Gary Moore shares his views on what made George Harrison such a distinctive and influential guitar player.

Check out the video which previews the app’s features below.