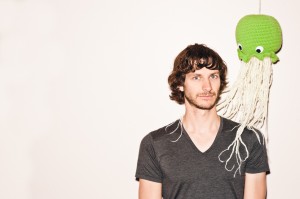 It’s time for Gotye to unleash not only another fine tune for our ears to enjoy but…and it is a big but….it is also time for the fine people behind his quite amazing video to bring us another outstanding affair of a visual treat.

We remember, back in July last year, catching up with Darcy Prendergast from Oh Yeah Wow who was working on Gotye’s new stop start animated video and causing havoc on the streets with his live video shoot for the band Music Sound Dance (check out our previous interview with him here and the quite stunning videos that Oh Yeah Wow and Darcy Prendergast have under their production belt).  Yes, it really does take that amount of time to put these creative works of art into place and it is fair to say that Darcy and the crew from OYW have come up with a stunner of a video.

The clip was shot using a complex mathematic formula (admittedly not the studio’s strongest trait) and 360 pan motion control rig that rotated within their custom-built 5-room set. This set was practically a small house built within the studio – tiling the bathroom walls, wallpapering the others and sacrificing the studio beer fridge to fit the colour scheme.

A true labour of love, the video took nine months of development.  The set – a five-room house that was built from scratch – took up their studio space for almost three quarters of the year.  We’re not that patient but that’s why people like Darcy and the crew do what they do!!!

Darcy had this to say about the making of the video:

“We completely disregarded ‘good business sense’ and created a piece of art that would hopefully leave the viewer’s cerebral cortex sliding down the computer screen.  From a visual perspective, we wanted to bombard our audience with magic. I’m a huge believer of in-camera trickery and have always been an avid fan of stop motion but those skills fused with those of our resident VFX wizard, Andrew Goldsmith, enabled us to create some pretty astonishing but deliberately understated animation”.

The video release is all great timing too as last night, Gotye reclaimed the number one position on the UK singles chart with ‘Somebody That I Used To Know’. Believe it or not, that single is now certified Gold in the U.S, where Making Mirrors has sold in excess of 100,000 copies.  Wowsers indeed!!!!!  You know what…it definitely feels like it is the beginning of a great journey on US soil too.  We can’t wait.

So, without further postponement of the audio and video variety, get your fix of Gotye’s new track and stunning video below.

One thought on “Gotye – Easy Way Out (Official Video)”