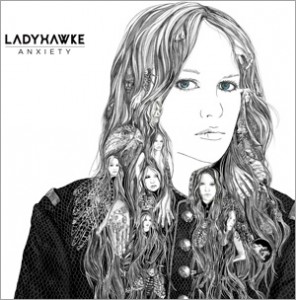 We caught Ladyhawke at her sneaky secret gig at The Tote Hotel in Melbourne tonight and she was on fine form with her band.  They were playing a mix of new tracks from her forthcoming album ‘Anxiety’ due out 19th March 2012 and some classics from her previous album.

If you are a regular to this site, you’ll probably know that we don’t post up too many ‘live’ gig reviews.  We go to a big old number of gigs, but to be honest, we don’t get a lot of joy from trying to put pen to paper on how good a gig was.  We’d rather soak up the gig and enjoy it, than take pictures and try to remember it fully.

Anyway, we digress. Ladyhawke was stunning tonight.  If you are familiar with her tracks, she belted out all of the classics from the first album and sandwiched in the new tracks which were all in equal fine form.  The track list which was on a laminated piece of paper next to the sound desk was great and when you looked at the tracks she was finishing the night on, it would be fair to say that there was a surge of new tracks towards the finale of ‘Delirium’.  However, any apprehension that the punters might have had was blown sky high as the new tracks that were played tonight were consistently awesome.

Ladyhawke will be releasing her new album titled ‘ANXIETY’ in March 2012 and the artwork has been created by Sarah Lanarch for the very first time.   Great work we say!!!!

Make sure you stay tuned to all things Ladyhawke over the next few weeks as she will be announcing how you can Pre-Order the album very soon.  We cannot wait!!!!

Check out this link to the album teaser here and check out all things Ladyhawke below:

Also check out this classic track and video for ‘Delirium’ from her first album:

One thought on “Ladyhawke – Anxiety”