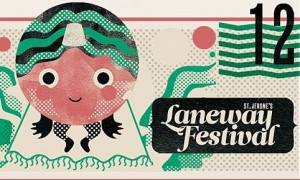 Well, the line up is out for the 2012 Jerome’s Laneway Festival and you know what….it’s bloody good!!!  Awesome in fact!!!

In fact, we think this line up tears the BDO line up to shreds with the likes of Active Child, Glasser, Washed Out and Yuck…just to name a few.  In double more fact, you might just look at the line up and think we might have just seen a lot of those artists before somewhere….where I hear you ask??? Well on this very site indeed of recent months, that you should have had on yourmusicradar this year.

Ear bliss ahoy we can hear.  The only dilemma is, do we get tickets to the festival, do we wait for sideshows or do we cross fingers and hope that a big old chunk of these are going to be at SXSW 2012 and we’ll be seeing them there anyway…

It is more than likely that they’ll be hitting the SXSW list in March 2012 as we reckon a lot of these artists are up and coming goodies that will be on the treasure trail of gig’age next year.  No doubt!!

So, have a look at the list below and let us know if you are as excited as we are….bring it!!!!

Do yourself a favour and check out the artists  Active Child, Glasser, Washed Out and Yuck on our site (search under our other posts) and stream some of their awesome tracks to make sure you get in the mood for 2012!!!

Check out the official site here