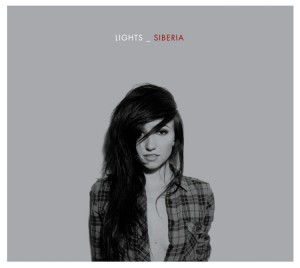 What do you get when you take a top selling Canadian artist and a top dance band/production team? Well, you get the album Siberia by Lights which has been mixed by Holy Fuck!!!

Before listening to this album, we’d read that Lights had put together a traditional sounding album of her calibre and handed the tracks over to Holy Fuck to work some grimey dubstep mixed beats and magic to the tracks. You know what, they’ve done some great work. It’s a gamble but a gamble that definitely sounds like it was worth taking.

Is this album going to be popular with your traditional Lights fans? Maybe it is and maybe it isn’t. However, I’d wager that it will definitely pick her up a new fanbase off the back of these tracks. The only downside we can see with this album is the potential for commercial single releases (Kelly Clarkson’s ‘My December’ album anyone??)

Lights previous releases in the US have been on Sire. However, with the change of direction on Siberia, this has been released on Lights Music.

OK, so down to the album and what do we think? Well, as you probably know, if it wasn’t any good we wouldn’t be reviewing it as it wouldn’t need to be on your music radar. However, we think it ain’t half bad, so let’s talk the good stuff shall we?

The self titled opener of the album ‘Siberia’ is a bristling beat ridden track that gets you into the mood for what Lights is going to bring us. The clappy beats of ‘Where The Fence is Low’ descend back and forth into a chorus of dirty dubstep beats.

The tracks on this album that might just be the breadwinners ‘Heavy Rope’, ‘Cactus In The Valley’ and ‘And Counting’ and are definitely a quality affair. The subtle keyboards, rolling bassline and vocals on ‘Heavy Rope’ make it a standout on the album. The ballad ‘Cactus In The Valley’ too is quality. ‘And Counting’ is a very addictive lo-fi track. All of these three tracks are crying out for stomping remixes too that would cross over into clubland, particularly ‘And Counting’ as there is so much you can layer over it.

Listening to this album, you can’t help but think that this would be a barn storming affair played as a live set on tour. The last track on the album ‘Day One’ is a 9 minute live studio mad dirty jam session between Lights and Holy Fuck that probably won’t suit most Lights fans but will definitely suit the seasoned Holy Fuck fan.

Whether you are a seasoned Lights fan or you are sticking your toe into the water for the first time with her or Holy Fuck we recommend you check out the tracks below and explore Lights’ Siberia.