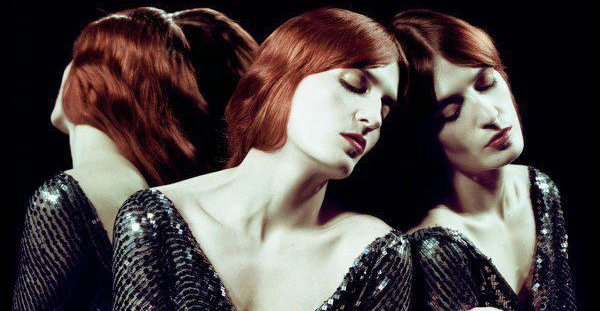 He’s at it again!!! Our roving gig radar Aymeric de Rosbo has been out on the trail of a good concert and has dropped us another fine gig review.  This time it’s for the mighty Florence + The Machine when she dropped in with her band at Rod Laver Arena.

The fact that I am not 14-16 years old and female always meant that I was going to be in the minority for the Florence and the Machine gig at Rod Laver Arena. The evening started in an ominous manner when the instruments of “The Machine” were uncovered after the opening set from Blood Orange. As the covers were pulled off to reveal a harp, the crowd greeted its appearance with rapturous applause. Perhaps, I missed something, but to my untrained eyes it diod not appear as though the harp had done anything to deserve such acclaim. Oh my lordy wordy. This continued throughout the evening; no matter what Florence said, roars of approval greeted her every word:

Florence: It’s great to be in Melbourne
Crowd: Woooo

Florence: You are the best audience ever
Crowd: Hooray

Florence: I am going to walk over here now
Crowd: Wooo again

Florence: You will have to excuse me for a minute whilst I just duck off backstage to club some baby seals
Crowd: Yaaayyy

That aside, Florence was amazing. Rod Laver Arena is a huge venue and the fear prior to the show was that she would get lost on a stage of this size. These fears however were completely unfounded as her enormous presence made the gig feel more like a club gig than a stadium one. It was almost impossible to not get caught up in the moment as a wave of questionable dance moves swept across the audience. Skipping from one side of stage to the other, Florence did her utmost to involve everyone in the crowd, even those who were wearing oxygen masks and climbing gear to combat the thinner atmosphere and cooler temperature around the cheaper seats.

Thanks to the rise of websites such as www.setlist.fm, setlists are no longer much of a surprise and in this case, it was no different. There was a smattering of songs from “Lungs”, but mostly the setlist was pulled from “Ceremonials” which shouldn’t have been a great surprise seeing as though it was the “Ceremonials” tour. Funny that. Whilst it was great to see “Dogs Days are Over” and “Rabbit Heart” performed, surely there must have been room for “Drumming Song”, “Hurricane Drunk”, “My Boy Builds Coffins” “I’m Not Calling You A Liar” and that ode to domestic violence, ”Kiss With a Fist”. In essence, a Don’t Look Back concert series on “Lungs” would not have gone astray at all. Admittedly celebrating the legacy left by an album that is only three years old may be slightly presumptuous…

To say that Florence’s voice is a bit good is an understatement of massive proportions. “No Light, No Light” seems to be a vehicle as much as song to prove that she can reach and sustain notes that most people cannot even dream about. “What the Water Gave Me” is quite simply a brilliant song and the standout track on Ceremonials, whilst “Only if For a Night” is just a bit odd with its talk of practical ghosts and the like.

As virtually every song is a sing-along opportunity there is always the chance that some “The Voice” style butchery could be afoot. Having seen an ad for this “talent” show, I believe that the “talent” moniker is being applied very, very loosely. Admittedly there are thousands of Gotye covers of varying degrees of quality, but surely none is as bad as that one. The take on “Forever Young” is truly extraordinary as it manages to take an average song to begin with and plumb it to new depths. Now giant squids are petrified that they are under attack by some sort of insidious new weapon. Thankfully this did not happen tonight, as Florence was ably supported by the Machine.

In normal circumstances, the Machine would be recognised as fantastic ensemble in their own right, rather than simply Florence’s backing group. This is because quite frankly, they are excellent; the harp, piano, twin drummers, backing singers all combined to make this a special evening.

No matter what the occasion or the venue, Florence and the Machine always produce the goods, and tonight is no different.