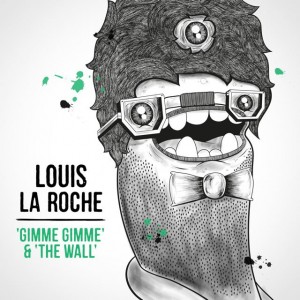 Louis La Roche releases the double A sided single ‘Gimme Gimme’ / ‘The Wall’ through Ever After Recordings exclusive to Beatport on September 19th and through all other digital retailers October 3rd.Exciting times are ahead as this is the first release from Louis La Roche’s forthcoming album, ‘Hello You’, which he has been working on throughout 2011. The single will feature remixes of ‘The Wall’ from Shook (hot property at the moment isn’t he) and J Paul Getto, and videos have been commissioned for both tracks.  If the tracks on the album are as good as the mixes we’ve heard, we are all in line for some good tracks.  By the sound if it, we’re in for what sounds like a Lindstr0m and Christabelle kind of time (which you know has got to be good).

Louis La Roche established his distinct French House sound with his debut EP ‘Me & Her’ and its follow up ‘Super Soaker’. Collaborations quickly followed with Yann Destal, on the single ‘My Turn’, and Patrick Alavi, on Patrick’s EP ‘Number One’. Louis has also remixed the likes of Basement Jaxx, Teenage Bad Girl, Fred Falke, Stretch & Vern, SomethingALaMode, The Swiss (see our review for this track on our site) and Gorillaz.

If you’re a regular to this site, you’ll know we love Louis La Roche with his remix of The Swiss and the mighty mighty remix of Michael Jackson’s ‘Thriller’ (do yourself a favour and look this up on our site from an earlier post as that mix is quite something indeed).

Ok, enough from us.  Give yourself a little taste of what’s to come from Louise La Roche with this double treat below.  Not only a new track but also a rather tasty remix by Shook (the mix by John Paul Getto ain’t too bad either, taking us from a chilled vibe up into a house space).

Make sure you get yourself onto Beatport too as these tracks are going to rock your house!!!