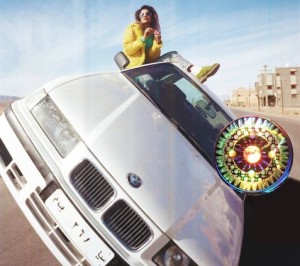 M.I.A.’s new track ‘Bad Girls’ has just been released and the new video too which looks like it’s straight out of the movie Three Kings.  Like the track.  Love the video.

We reckon that the new album could be quite special if this is anything to go by.  Fingers crossed.  It will be interesting what happens following the Madonna half time show at the Superbowl.  We know and you know who M.I.A. is but there will be a lot of folks who will make their first acquaintance with M.I.A. at that half time slow with Madonna and Nicki Minaj.

“It was dope to  have so many people from so many different backgrounds speaking so many different languages come together to create something that we believed in,” says M.I.A about the video. “I thought I was gonna die on the shoot when I saw the drifting.  It was a four day shoot so everyone was on edge the whole time specifically ME when I had to do bluesteel singing to the camera while the cars did doughnuts on the wet road ten feet away. In my mind I was thinking how I was gonna deliver the video to Vice with no legs.”

Check out the track and the video shot in Ouarzazate, Morocco, which was directed by Romain Gavras (M.I.A. ‘Born Free’ and JUSTICE ‘Stress’)