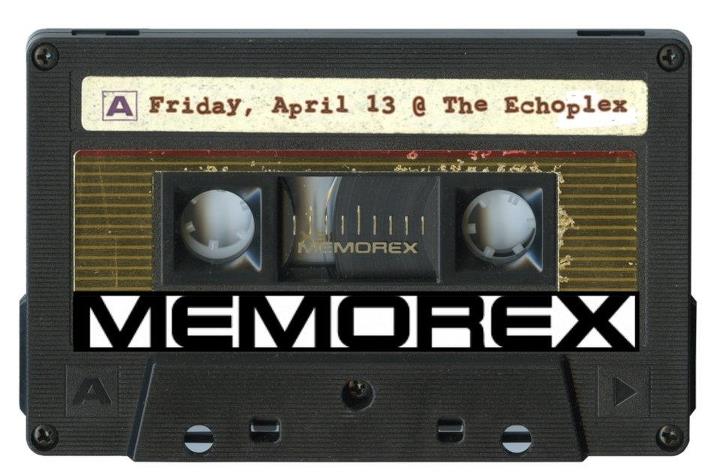 DJ Paul V. is celebrating his 30th anniversary with ‘Memorex’ a unique dance event concept and mixtape retrospective at The Echoplex.  It’s all going down on Friday 13th April 2012 in LA and you should be there to enjoy!!!

Not only does the night hold the awesome DJ Paul V. but he has along for the ride one of our favourite artists, Baron Von Luxxury!!!  He’ll be performing tracks from his album ‘The Last Seduction’ which we can tell you, is an awesome experience, so you should get along for this at midnight.
The clubs and music vibe in the mix will include:

My club DJ career started in 1982 in Boston, and I’ve been blessed with being able to play to some of the best crowds ever – gay, straight, mixed – at some of the best clubs you could imagine. Up through around the year 2000, I recorded many of my DJ sets on cassette, and I will be choosing 30 or 45 minute actual sets from each of those club nights, and THAT’S what the ‘Memorex’ crowd will be dancing to. What will I be doing during those sets? Jumping down in the crowd to dance, too! But, I will also be spinning live DJ sets, featuring the new music I love now.

You could say these will be retro DJ sets, but that’s incorrect. Because what people will be hearing is the new music I played – as it happened. I remember buying the original 12″ singles for (now) classic tracks like Michael Jackson ‘Billie Jean,’ The Smiths ‘How Soon Is Now,’ Siouxsie ‘Cities In Dust,’ Grandmaster Flash ‘White Lines,’ Dead Or Alive ‘You Spin Me Round,’ New Order ‘Blue Monday,’ Cabaret Voltaire ‘Sensoria,’ Ministry ‘Stigmata,’  Nirvana ‘Smells Like Teen Spirit,’ Dee Lite ‘Groove Is In The Heart,’  Madonna ‘Vogue’ – and dying to play these (and so many more) for the first time. This truly was the golden age of music for eclectic dancefloors!

This night will be a retrospective of my career, but it’s more to celebrate three decades of the incredible music I’ve been able to play, and being fortunate enough to have crowds keep showing up and allowing me to be eclectic and creative with my DJ sets. And, trusting my instincts. Without them? I’d just be playing music in my damn basement!

Check out all things DJ Paul V., Baron Von Luxxury and The Echolplex below: