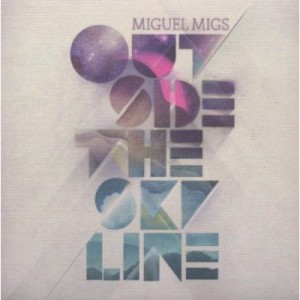 It must be summer time in the Southern Hemisphere soon, as a certain Deep House DJ and San Franciso producer Mr Miguel Migs has a new album out called ‘Outside The Skyline’ and he’s brought us back his funky house beats of joy.

Miguel Migs has not only brought us another stunner of an album, but he has also brought a host of guest singers (including some faves) along for the ride, including Lisa Shaw, Half Pint, Bebel Gilberto, Aya and Meshel Ndegeocollo to name but a few.

Opener ‘Life’ sets the tone for the journey Miguel Migs wants to take us on, with the track laying the funk filled foundations for the rest of the album. Deep foundations indeed!! One listen and you know Migs’ is picking up from where we left him with his last album. Has it really been that long between drinks from Migs’ sound filled solo album fountain? 4 years in fact (3 if you count the remix album).

Favorite tracks on the album? We’d definitely go for ‘Life’ and most definitely ‘Everybody’. The track ‘The Distance’ also is a winner and you can’t go past this track without giving a few repeat plays. What a voice Half Pint has got and makes it such an awesome track. We also like the reggae sounds on the album too. We’ve definitely stepped up a reggae filled notch since the last album.

Album closer ‘Getaway’ can’t help but grab you with a quality trademark Miguel Migs bassline and make you hungry to just stick the album back on repeat again.

We’ve been big big fans of Miguel Migs since his Naked Music/Nude Dimensions days and had the pleasure of catching him live a couple of times, most recently in Melbourne with Lisa Shaw back in 2008 at Alumbra, Melbourne Docklands. What a day and night that was… eeeek, time does fly.

We might be a little biased on the Miguel Migs front and our like of him, however, we seriously do recommend you get your ears into his album if you like funky house tracks that can bring you some joy on a hot summer’s day….maybe laying on a beach somewhere with a cocktail?

If you like the sound of his album, we also recommend that you dig through his back catalogue of solo albums and mix albums too. Definitely some ear joy to be had on Salted Music!!!

Check out the track Everybody below, taken from his album Outside The Skyline.

Welcome back into our musical lives Mr Migs….now where’s that cocktail???