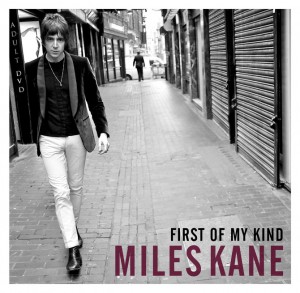 Miles Kanes is due to release his new EP in April 2012 and the track ‘First of My Kind’ is a belter of a tune that will get under your skin.

The EP features four tracks and opens with ‘First of My Kind’ which was co-produced by Skream at Metropolis Studios in London. The other tracks include a cover of the Tom Jones classic ‘Looking Out My Window’ and another brand new song, ‘Night Runner’. It concludes with an acoustic version of the title song to his last album, ‘Colour of The Trap’.

The EP will be available on limited edition vinyl on Record Store Day, Saturday 21st April 2012. A digital version of the EP will be made available from Sunday 22nd April.

EP Tracklisting:
1. First of My Kind
2. Night Runner
3. Looking Out My Window
4. Colour of the Trap (Acoustic)

Miles is also embarking on a sold out tour of the UK throughout April with support from Eugene McGuinness.

Check out all things Miles Kane at his official site https://www.mileskane.com/ and check out the track ‘First of My Kind’ below.