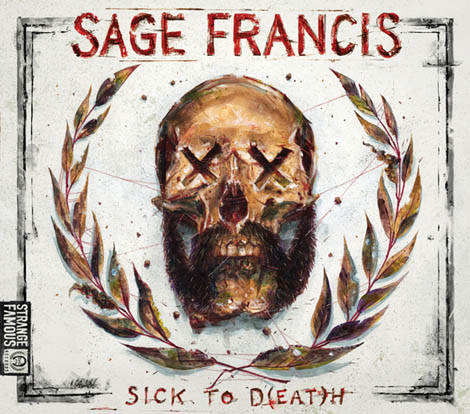 As the Mystery Machine pulled away down Swanston Street, Scooby and Shaggy were baffled, stoned and hungry; the latter two feelings were nothing unusual but the air of bewilderment was something new altogether. They struggled to fathom how a big, beardy white guy in a muumuu who was only armed with a laptop somehow ended up producing one of the gigs of the year. The fact that this defied all logic did not make it any less true however.

This conclusion was completely incongruent with the beginning of the night however. Early on in the evening, it did not appear that this was going to be the case. At all. The Hi-Fi Bar was filled with a number of patrons somewhere between 1 and 30 and it looked cavernous, like someone had decided that it would be cracking idea to have a gig in the Mines of Moria. It was at this point where you were wondering whether The Corner or Heaven forbid, even The Prince (despite its St Kilda location) would have been a better bet. First up was MC Hugo who did some freestyling. The only problem was that his particular brand of freestyling relies on audience participation and interaction. When there is a) hardly any crowd and b) the crowd that is in attendance is completely disinterested at best, it was always going to be a struggle. Yet struggle through he did. The addition of MC Mantra and Grey Ghost did get more people on their feet, but all in all, freestyling was not the winner on the night. Whilst I would not dispute that freestyling is incredibly difficult, I just don’t think the end result is worth all of the effort. I don’t think that I was alone in this, as there was a bigger line to get Sage Francis’ autograph at the back of the Hi-Fi than in front of the stage. My feelings towards freestyling are somewhat similar to Leela’s about holophoners, when she eloquently stated “A holophoner? But only a few people in the entire galaxy can play that, and they aren’t even very good at it.” Anywho, that is probably grossly unfair, but it just isn’t my thing.

Next up was Tenfold who are an Ozhop trio so I ducked off for a bit. Please refer to the last sentence of the previous paragraph for further clarification as to why.

At this particular point in time, it was fair to say that things were not necessarily going all that great. That however was soon about to change with the entrance of The Sage. Suddenly people did appear and not only did they appear, they actually stood up. The continuous sitting down however may have been involuntary; a mere side effect of the re-emergence of several spilt beverages of a refreshing nature that decided to make their presence known by fusing themselves to foolhardy patrons . In any case, the ultimate DIY gig was underway as Sage pressed play on DJ Nospinzo. The spitfire lyrics of Escape Artist gave a pretty good indication of what was to follow. The depth of lyrics goes far beyond what you would expect of a hip hop artist; no mention of bling, grills and cribs. There is an overwhelming atmosphere of rejection of this scene and the paint by numbers style of song writing. The lines “when I say hip, You, you say shut the f**k up we ain’t sayin sh*t” pretty adequately sums it up. This is one of the many things that differentiated it from a standard hip hop gig and one of the reasons that I actually liked it. There was no “putting hands up in the air like you just don’t care” and this was a very good thing indeed.

What was even better was when The Sage started channelling his inner Pixies and namesake Black Francis with his mash up of Where Is My Mind? and Agony in Her Body. The small but engrossed crowd singing along with the backing track “woo hoo” was probably one of the gig moments of 2013; definitely right up there with experiencing a massive Spanish crowd carrying on singing Tender despite the fact that Blur finished playing it several minutes earlier.

Not enough gigs play homage to Team America: World Police, but again this was another wrong that was righted with an all-singing, all-dancing mash up of America, F**k Yeah and Makeshift Patriot. The cynicism with the American Dream in this song isn’t so much in the style of taking a small nibble, but biting to such an extent that it is likely to devour you whole, in a similar fashion to Marlon Brando and anything. Of course it is too much for one song to outline all the problems of a society as a whole, but this one does seem to nail a hell of a lot of them. And it even has a feel good intro.

One frankly quite disturbing part of the set was when The Sage bought together Closer by Nine Inch Nails and his own track, Come Come Now. Whilst I am relatively open minded, I now have an image of The Sage gyrating on stage tattooed into my brain. Forever. No laser surgery is going to be able to get that one out. Aside from that disconcerting piece of mental imagery, the excellent choice of mash ups was one of the most outstanding features of this set; from the aforementioned Closer, to Broken Wings, which allowed Sage to set free his inner 1980’s soft rock star who is clearly dying to get out. Broken Wings also references possibly the greatest trilogy of five books ever written, The Hitchhiker’s Guide to the Galaxy. It was at this point that the gig became a bit like a self-help seminar. The uninitiated were told that flying can easily be undertaken, just as long as you can get the knack. Its knack lies in learning to throw yourself at the ground and miss. Sound consumer advice if ever there was any and quite amusing for those audience members of a nerdy disposition such as myself.

No Sage performance would be complete without a bit of Civil Disobedience and this was no different. The existential questions at the beginning now carry more gravitas, as The Sage isn’t quite as slimline as he once was. Given how much is going on in this track, there are not unsubstantiated fears that it could claim his life, but it is still a way better way to go than the way Elvis did.

The only downside was the set was cut short before any new material could be premiered. Looptrop Rockers were then left with the unenviable task of following up this masterclass to a once again vacant venue when The Sage signed off. Possibly an error in the playing order, but it worked out well for me as I am old and I like sleep.