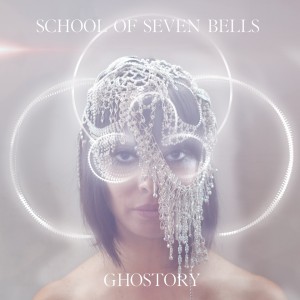 School of Seven Bells’ new album ‘Ghostory’ is due out next week on 28th February 2012 and if you are waiting for it and hoping it is going to be as good as the tracks you may have heard such as ‘Lafaye’, then you are not going to be disappointed.

This album is mighty fine indeed.  From the album opener ‘The Night’ which is reminiscent of a Cocteau Twins track or two (in fact the album is very CT and it’s all good), you know you’re in for a great ride with this album.  ‘Lafaye’ is a quite outstanding track that sets the bar for the rest of the tracks on the album. ‘Low Times’ is an epic 6 and half minutes of a track that drifts from rock into dance and back into rock and this will be an awesome track live, no doubt on that.  ‘Scavenger’ keeps the BPMs going at a fair rate and is another single quality track.  There are also a fair few slow ballad tracks that split up the albums momentum nicely too.

If you can’t wait to buy the album and just have to listen to it now, then you can get your streaming fix below courtesy of Hype Machine.  They stream our tracks, so we thought we would return the favour.

Check out all things School of Seven Bells below and get streaming!!!!