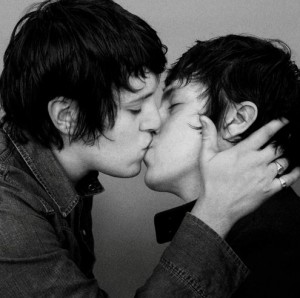 SebstiaAN’s album ‘Total’ is out now and  this album is just plain phenomenal.  Imagine crossing Daft Punk, Justice, Soulwax and Prince with a little bit of Chromeo!!!  Sound good?  That’s the kind of album you’ve got.  I’ve only picked up on SebastiAn recently and ‘Total’ has just blown me away.

Sebastian Akchoté’s album cover art features a picture of him kissing himself.  Interesting and clever.  He is one of those artists that has been a quality remix producer for other artists before getting to grips with an album release of his own (think of him like Chris Glover from Penguin Prison).

The track ‘Embody’ is electronic funk to the core and is outstanding.  If you like this track, you should definitely give this album a listen as it’s a stand out release for 2011.

As I’ve gone through each track,they just get better and better.  As always, it’s the albums that you least expected to punch you in the guts with amazingness that take you to another place. As M.I.A. says on the stomping track C.T.F.O. “you better C.T.F.O…Chill The F*ck Out”.

This album is a definite nominee for dance album of the year.

One thought on “SebastiAn – Total”