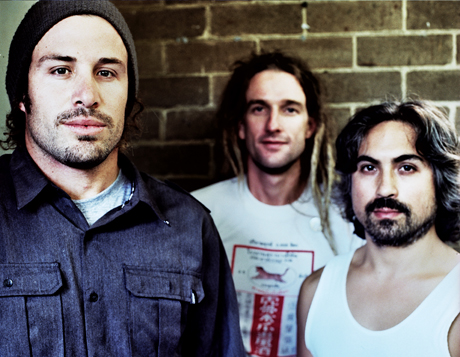 It wasn’t exactly the day the music died, but still when one of your favourite bands decides to call it a day, it is a bit sad. And that is exactly what this was as The Beautiful Girls bade farewell for the last time with a series of gigs at The Corner. After 10 years together, The Beautiful Girls moniker was to be put to rest and three sold out shows indicates that the music following public of Melbourne had not taken the news lightly.

The Farewell Tour was promoted as a being composed of two sets, one acoustic and the other electric. In this way, any Bob Dylan at the Newport Folk Festival style unpleasantness involving surprisingly militant, irony deniers with flowers in their hats was avoided as fans of both styles of music were placated. Well that was the plan in any case. After the first show in the tour, this was shelved as the lack of an escape route from performing in the round meant that the intermission was rather awkward with apparently a fair bit of “so you like stuff?” type action. Instead, everything was thrown together and we were treated to one big set. And what a set.

We’re Already Gone set the scene for the entire night; The Beautiful Girls acting as snake charmers making the crowd sway and sing along with the languid reggae beat. Fill Your Cup and My Mind is an Echo Chamber followed in relatively quick succession creating an environment that for all intents and purposes appeared to be conducive to the making of jerk chicken and the consumption of university cigarettes.

After this, it was the turn of the elephant in the room to make its appearance. It came as no surprise that this set was to cover the breadth of The Beautiful Girls catalogue, but the inclusion of …And We’ll Dance on the Ashes of What’s Left was still rather unexpected. This turned the set into the metaphorical exact opposite to eating a Cadbury Crème Egg; one which has you cracking through the very definition of a “meh” exterior and then being swept away in a tsunami of insipidness. After years of attending Beautiful Girls gigs in venues ranging from Ferntree Gully, Melbourne Zoo, St Kilda, Richmond and Byron Bay, they finally relented and played this wonderful song about I’m not too sure what. This was the gig that just kept on giving.

After this momentous occasion / song, I could have left quite happily, but this was only about half an hour in. Still plenty of time to include a Matt McHugh solo single in Go, Don’t Stop, Dela from Ziggerauts and Take the Long Way Home from We’re Already Gone. The only thing that was creating any sort of annoyance was the crowd. One particularly fine and upstanding gentleman was keen to show his newfound mastery of dual syllable words. “Pau-lee”, he called out to the bass player. Then, as if to show that it was no fluke, proceeded to do it again and again. This only went on for another five minutes, when this intellectual Hercules must have gotten bored, moving on from this incredible display of articulation to no doubt devoting his energies to proving Fermat’s Theorem.

Then there were people who were essentially rude pricks. If there was ever any doubt, it is now a proven fact that pushing your way to the front and parking yourself directly in front of someone who is several feet shorter than your good self is not a great way to endear yourself to your fellow patrons. Luckily, the 99% were present and through a dancing style that incorporated equal parts grace, elegance, class and brute force, cleared the area of the aforementioned undesirables leaving it safe for the literal and metaphorical “little guys”.  Admittedly it wasn’t exactly occupying Wall St and bringing down Capitalism, but hats off to them, they got the job done. The world was safe now, but for how long?

The next big sing-a-long moment arrived in the form of Periscopes, which possibly due to being written several years after the release of the film Up Periscope, was somehow not included on the original soundtrack.  Whilst it would have been interesting to hear a Sideshow Bob / Kelsey Grammer cover, tonight probably would not have been the ideal time to do this and now the moment is gone. Alas… looks like Kelsey will have to content himself performing H.M.A.S Pinafore to a captive audience instead. Whilst frequently reserved for the encore, it was perfectly situated in the middle of the set. The segue into Tainted Love fitted in seamlessly as did Radiohead’s Creep later on during I Thought About You and provided a fitting send off to a classic song that will probably not be heard  in this arrangement for quite some time now.

Music had everyone feeling alright whilst Blackbird was haunting on two levels; firstly because essentially it is a haunting track and secondly through the fact that it is already ten years old and how old that makes me. Tracks from the most recently release Spooks were next, including 10.10, Rockers!, Don’t Wait and Gratitude .This last song featured Pauly combining bass and rapping duties in a diatribe against the trappings of fame, in a similar way to Good Charlotte, except that Pauly is not a complete douche making mediocre “music” in the loosest possible definition of the word.

The now extended brass section that had added extra depth to the sound all evening was employed to full effect in The Wrong Side of Town. Band introductions and customary solos were undertaken with aplomb as the main set closed out to fanatical baying, in desperation for an encore, which was duly granted after the briefest of breaks.

The main surprise of The Beautiful Girls’ set at Splendour that opened up the Farewell Tour was the absence of mobile phone recording and lighter waving favourite, La Mar. This was rectified tonight and the line “I’ll be with you even when we apart”, which whilst aiming to be reassuring, raised questions about existentialism and was proven upon closer inspection to be completely false. The sentiment was nice though and the song remained beautiful however.

There is no way that having The Beautiful Girls “retiring” can be construed as a good thing, but it is probably better to go out on top than risk sliding into a sad type of irrelevance in a Smashing Pumpkins kind of way. That doesn’t make it any less sad though. If this really has to end, I am glad that it ended on a performance as good as the one tonight. Farewell Beautiful Girls, you will be missed.