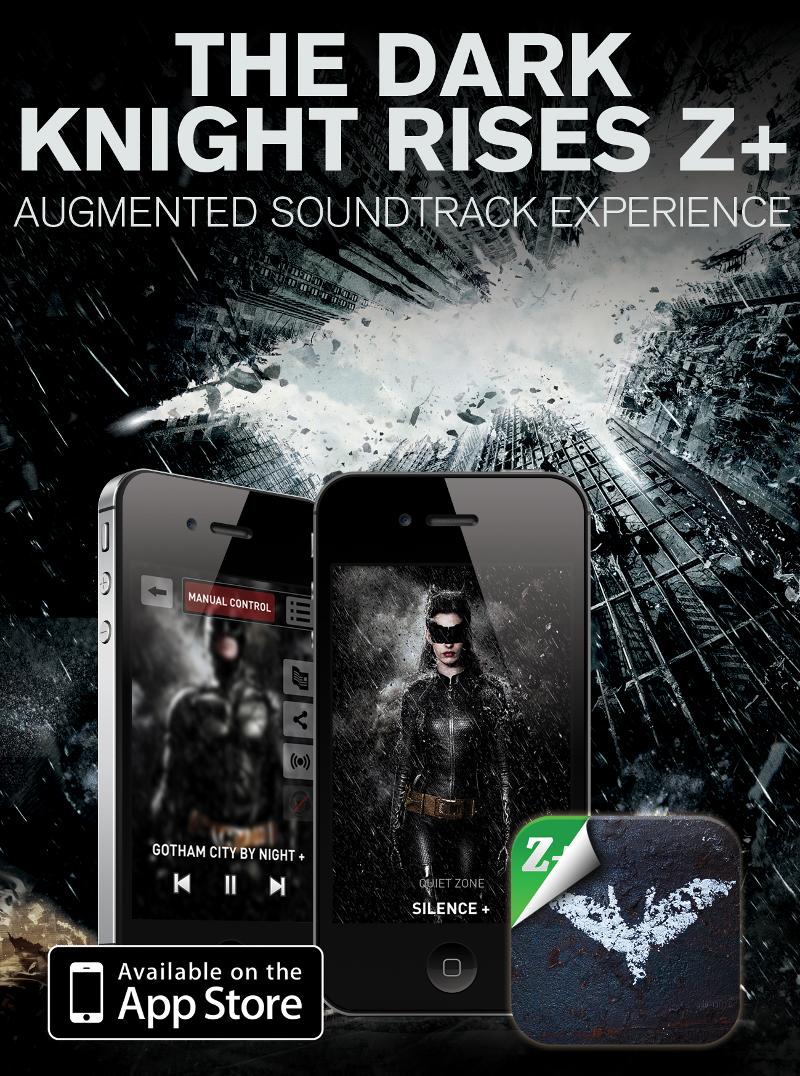 The app immerses fans in a one-of-a-kind sonic experience that syncs daily life with the sonic world of Gotham City. Through the use of proprietary audio technology, The Dark Knight Rises Z+ blends Zimmer’s evocative score for Christopher Nolan’s film with the user’s surroundings to create a personal augmented sound experience.

The Dark Knight Rises Z+ includes three-augmented music pieces based on the themes of the story. The Z+ technology enhances the sound; letting the user experience the soundtrack as Zimmer and Nolan intended it to be heard in the movie. The app features two modes: Manual (where users choose what they hear) and Autopilot. In Autopilot mode, the app crafts a custom sonic world by instantly responding to a user’s location, movements, time of day, and other factors to generate the ultimate real life soundtrack.

“I’m hoping to give fans of this beloved trilogy the opportunity to fully immerse themselves in the sounds capes and atmospheres of the world of the Dark Knight,” said Zimmer. “This new app allows users to be part of the film in a way that goes beyond the movie screen-it’s the difference between a looking at a photo of a river, and being able to drop your hand over the side of the boat and feel the currents of the water tug as the river takes you on a journey.”

The App also includes a unique “Fly the Bat” mode. By rotating and tilting their device users can interact with the original movie sound effects created by Academy Award® winning sound designer Richard King. Users will also be able to download a special “Story Time” feature within the app to hear an exclusive behind-the-scenes discussion with Zimmer and director Christopher Nolan.

“Hans sets creative goals for a project higher than you ever thought possible or practical,” said Christopher Nolan. “He took the same approach with The Dark Knight Rises, crafting a magnificent and totally unexpected suite for our new villain as we were just starting to shoot.”

The Dark Knight Rises Z+ App is available for free from the App Store on iPhone and iPod touch or at www.itunes.com/appstore. Additional Z+ content is available via In-App Purchase; including a special “Origins” pack that features an extra 55 minutes of music. “Origins” comprises four original suites (“Wayne Manor”, “Bane”, “Selina Kyle”, and “Orphan”), representing the musical DNA for The Dark Knight Rises. Zimmer wrote these pieces while the film was in the early stages of development, and they served as the blueprints for what would become the final soundtrack.

About Hans Zimmer
Hans Zimmer is one of the most iconic composers of his time. He has scored over 100 films, grossing more than 19.6 billion dollars at the box office worldwide, and been honored with the Academy Award®, two Golden Globes® Awards, three GRAMMY® Awards, an American Music Award, and a Tony® Award. In 2003, ASCAP presented Zimmer with the prestigious Henry Mancini award for Lifetime Achievement for his impressive and influential body of work. He also received his Star on the Hollywood Walk of Fame in December 2010. Zimmer served as Music Director for the 84th Academy Awards in 2012.

About RjDj
RjDj (www.rjdj.me) was started in 2008 by Last.fm founder Michael Breidenbruecker. The company’s vision is to redefine the experience of music listening for the 21st century. Previous top ranking applications from RjDj include Inception the App, Dimensions The Game, Rj Voyager and RjDj.