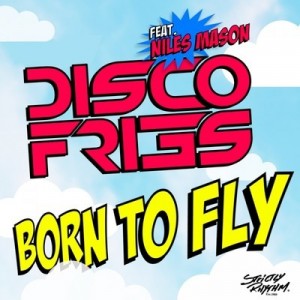 Are you Born To Fly?  Well, we can tell you that The Disco Fries definitely are with their new single ‘Born To Fly’, a funky French-flavoured bassline number with stretched strings and filtered passes topped off by Niles Mason’s soul-rock vocals.

New York’s Disco Fries had themselves a good 2011, releasing their debut artist single ‘Killer’, remixing Flo-Rida’s Good Feeling and collaborating with Tommie Sunshine for a remix of Katy Perry’s ‘The One That Got Away’ and their own production, Don’t Look Back.

For 2012, they’ve already collaborated with Tommie Sunshine on their remix edit of Azealia Banks’ track ‘212’ which looks set to rocket up the Hype Machine chart this week.  They’re back with their original tune with singer Niles Mason (fresh from his appearance on Louder Than Words with David Guetta and Afrojack) for ‘Born To Fly’. Alex Kenji tweaks the controls for the more clubby excursion while the Liftoff remix by The Disco Fries boys gives it the Electro House Treatment.

If tracks like these are what 2012 has in store for us from The Disco Fries, then it’s going to be an exciting year indeed.    The Disco Fries are also hitting up a residency at Moon Nightclub in Las Vegas and are playing Tuesday 6th March.  Luckily, we are going to be in town en-route to SXSW so we’re looking forward to catching these guys in action.

In the meantime, we seriously recommend that you check out the track below, get your iTunes fix here and check out all things The Disco Fries here: