With subject matter that is slightly on the more opaque side of pitch black, tonight’s gig was never going to be one that had the masses rolling around the aisles with tears of laughter streaming down their cheeks. Tears could possibly come, but they most certainly would not have been as a result of laughter.

This was a typical Drones gig, which meant that it was completely diametrically opposed to a group like The Flaming Lips for example. Well at least the old Flaming Lips before the release of The Terror, which makes the collected works of The Smiths sound like a light hearted romp created by Morrissey, the Magical Man from Happy-Land who lives in a gumdrop house on Lollipop Lane. The Terror takes the Flips sense of fun, ties it up to a chair and starts hacking at it wildly with a cutthroat razor to the sound of Stuck in the Middle with You. In this sense, The Drones and The Flaming Lips are becoming more and more similar, albeit Drones gigs are still characterised by a lack of glitter, confetti and balloons.

It could just be that I See Seaweed just really isn’t the feel good album of the year. Actually, there is no “just” about it, it isn’t. The lyrics hit much closer to home and this is likely to be a result of being more focussed on contemporary life, apart from Laika the Kosmo-dog. The sense of detachment and separation from the tales told in Gala Mill, Havilah, The Millers Daughter, Here Come the Lies or Wait Long are conspicuous by their absence here, which results in an uncomfortable listen. This is because you can now unfortunately now relate to more or less every single word. It is as if this album has been developed with the purpose of being the soundtrack to the gradual unravelling of society and you get to witness it firsthand. Huzzah.

There was just something about this gig that conveyed a particularly strong air of menace. The 12 minute, several thousand verse opener, I See Seaweed set the tone for the entire evening. The keys of newcomer Steve Hesketh create an extra dimension of tension to the song. Given where Drones song have been previously, the notion that it is possible to add an extra dimension of tension may sound rather farfetched, yet here we are. In fact the same could be said for all the songs off I See Seaweed; they are unrelenting and brutal. A Moat You Can Stand In is a bit of an outsider and slightly anachronistic, almost appearing to belong to The Drones of a different era with different concerns and agendas. It is a song that appears to be channelling I Don’t Ever Want to Change from Wait Long… with its lightning speed and frantic vocals. Almost as much as I Don’t Ever Want to Change which closed out the main set. 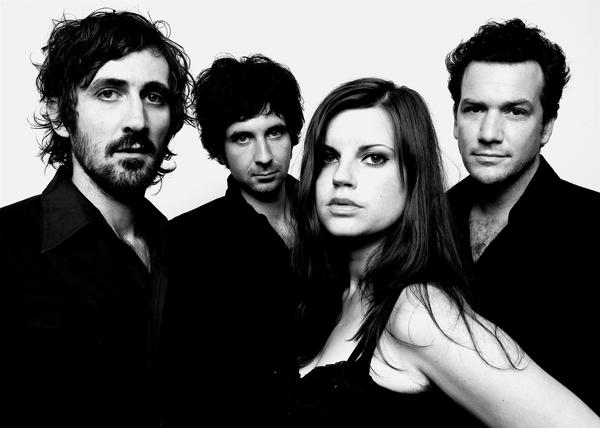 Fiona Kitschin’s booming bass heralds the arrival of the highlight of set in Six Ways to Sunday. Ominously, it sends shivers down the spine in preparation for the onslaught that is to come. I am still uncertain as to whether the motto for this track should be “leave no man (or person really, in these days of a wafer thin veneer of gender equality) behind in relation to not holding anything back on a musical level, or leave no one standing in relation to the audience. A change of only one word, yet such a different meaning. The result ends up being pretty much the same however. Either way, Six Ways to Sunday would have been an excellent replacement for Ride of the Valkyries and also would have gone great with Napalm in the morning. This track has been a staple in The Drones setlist from many years and for very good reason. One of those reasons is that it is rather good.

Nine Eyes was another highlight, as through Gareth’s snarling you could almost feel his contempt and loathing for the owner of “this lime green Commodore”. That sense of revulsion was also present during the retelling of the tale of Laika, the first dog launched into space. No doubt the launching was only done after Laika provided her expressed written consent. Ahem. The imagery used in this song is evocative of the novel 1984, complete with wonderfully functional but horrendously ugly Soviet era architecture and the smell of boiled cabbage which really isn’t a win on any sort of level.

To provide some sort of context as to exactly how powerful this set was, you only need look at the use of the Jaws theme as a segue into Shark Fin Blues. It really says something when a film about people being ripped into bite sized pieces by a bloody great big (and not at all plastic) shark provides a moment of levity in proceedings. That being said, it did provide a sing along moment leading up the grande finale in Why Write A Letter That You’ll Never Send. This song is very much the Jezebel off I See Seaweed. Huge and rambling, it replaces themes of terrorism and warfare with far more wholesome ones such as the Holocaust, nuclear Armageddon and famine. If only there was a way to fit Pestilence in there as well, there would have been enough to complete the whole set. But at the end of song and the set, we are left with the comforting thought that The Drones are only trying to “make the world a much less painful place”. As though to symbolise this Gareth does his best Basil Fawlty as they leave the stage for the final time.

Of the seven times that I have seen The Drones, this was certainly the most confronting. The atmosphere was quite brooding, brutal and intense and other synonym for uncomfortable that you may wish to throw in there. It was excellent and deeply moving in a way that anything written by Dan Brown is not. If you want sunshine, lollypops and everything that is wonderful, go see Lesley Gore. Alternatively you can watch the Marge and Ruth Powers chase scene from The Simpsons. If on the other hand you want to see the best band in Australia, then go watch The Drones.