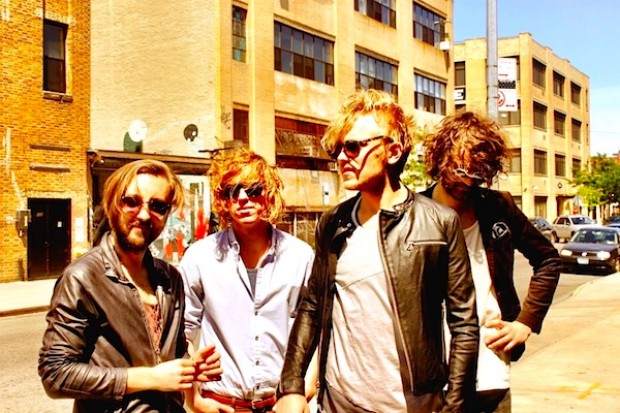 We have had The Royal Concept on our music radar for some time now and there’s a reason why they are on the YMR Watch List for 2013. The new single ‘World On Fire’ says it all as these guys are seriously on fire at the moment…and we have a timely pre SXSW Q&A with them for you!

We were lucky enough to get an interview in with the guys from The Royal Concept in-between their absolutely hectic schedule which is now bound to get even busier leading up to and following SXSW in March.  Here’s what they had to say.

We are absolutely huge fans of The Royal Concept here at Your Music Radar and we have been telling everyone and anyone we can that they should be getting into your tunes. So, when we bought the new FIFA 13 game for the PS3 back in September 2012, we were more than chuffed to hear one of your tracks on the soundtrack.

How did you feel when you had your track ‘Goldrushed’ selected for the hallowed ground of in game playlist for FIFA 13?

Honored. I remember discovering bands like Blur and MGMT through FIFA and it’s a great way to introduce your music to people who might not have heard it otherwise. When we played the first demo version of Goldrushed for a gamer friend he said “this is a FIFA track” and he was right.

What were some of your many highlights of 2012?

We went from sitting in a basement in Stockholm, working on some demos, to tour America for 4 month. It’s been a fantastic year with a lot of highlights. All the shows has been the best part and letting people judge the songs live. That has been really inspiring and really helped us to develop as a band.

You were on a massive US tour with The Wombats, Morning Parade and Wolf Gang at the moment.  What’s been your favourite city that you’ve played so far on the trip?

There were so many shows and not a single gig was boring. But the shows we did in Seattle and Portland had something extra. There were a lot of people there just for us and that’s just amazing, especially when you open for someone else. Most of the time people are there to see the headline act and as an opener you really have to convince them that you’re just as good, or maybe better =) In Seattle and Portland the crowd made us feel like we headlined fucking Coachella. That was something extra we’ll never forget, even when we’re actually headlining Coachella.

Have you managed to get out and soak up the US as a tourist too or have you been hotel bound?

In the first part of the tour we traveled in a van, so it was just like a road trip. We saw every state and stayed on the road and saw the cool stuff that people put up to fool stupid Swedish tourists like us. Like driving the car through the biggest tree in America, that was so worth 5 dollar each. But at the second part of the tour we had a tour bus and actually slept through all the driving. It made life a lot easier and we actually slept more than 3 hours a night for the first time in like 4 month. But touring also felt more like a job and not as a road trip anymore, since we basically just saw the venues and not the cities.

How have your tunes gone down with the live US audiences?  Have they known your tracks already or have you been winning them over with your infectious Swedish indie pop melodies?

That has been the most fantastic part of touring. To be able to try new songs on people and to let them judge. Often we played for people who knew “Gimme Twice” and “Dddance” but the rest of the songs were new to them. That’s awesome for us, cause you can really tell whats good and whats bad by the crowds reaction. Before we went to America we thought we had our full LP done, but after playing 50 shows for all kinds of audiences we really wanted to change everything. Thanks to the crowd, we developed something new on stage, wrote new songs and learned so much more about ourselves and what this band is. So as soon as we got back to Sweden we started to record the album all over again, and now, two months later it’s almost finished.

What are your plans following the US tour and going into 2013?

We’ll release our first full length album and then tour as much as we possibly can. We have shows booked in Europe, North America and Asia so far, but it would be really nice to play Australia and South America this year too. Time will tell. This year will start with the release of a new single and then we’ll open up for Imagine Dragons on their tour.

Have you applied to showcase SXSW in Austin, Texas (please say yes) or will you be busy in the studio recording your next EP? *Since asking this, we’ve had it confirmed that they will definitely be playing.

The only thing I can say is that we won’t be recording an EP during SXSW.

There have been some very favourable comparisons to the French band Phoenix and The Royal Concept.  Do you take those comparisons as compliments?

We’re really huge fans of Phoenix and also friends with their Swedish drummer Thomas, so we laugh about the comparisons. We usually tell people that the only difference between us and them is that they have a couple of million dollars (even if their “Bankrupt!” now) and we’re poor.  But I mean, we also noticed that Gimme Twice and Dddance could be Phoenix songs, but we never really saw something bad with that. It’s the first two songs we ever wrote and they got top voted on huge blogs and got a lot of radio plays all around the world. Even if they’re not the sound we’re looking for today, we still love them very much cause they’re the main reason why we can do this job full time now. Even if people are still obsessed by this Phoenix thing the only thing we can do is to show them over and over again that we’re something unique.

If the Mayans had known more than they were letting on and we were destined to hit indie pop music heaven at the end of last year, what track would you have wanted playing when we all went out in the big one?

We have a song on our EP called In the End that we really love. That one is epic.

Since we have been onboard The Royal Concept express train of audio goodness, we have been telling everyone and anyone we can how good this band is and I’ve been playing ‘In The End’ as it is as epic as a track gets.  I’m glad the boys agree on that one!

This band has definitely made our day with their brand spanking new listing on the SXSW 2013 Music Showcasing list so it’s fair to say that we’ll be bigging up The Royal Concept a lot more between now and later in March.

A big thanks to all of the good Royal Concept folk and let’s hear it for an awesome 2013 that is destined to beckon.

Get your audio fix of the new single ‘World On Fire’ below. It’s early days but it is going to be one of the best tracks of the year so far.

About The Royal Concept