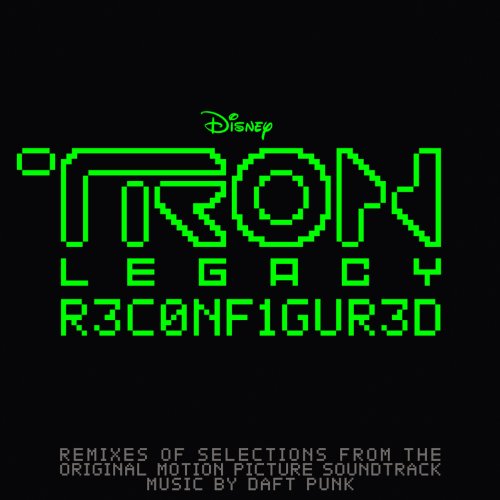 Greetings programs! The new Daft Punk Tron Legacy R3CONF1GUR3D remix album is out and for those of you who were hungry for more tracks in the style of End of the Line and Derezzed, this might just satisfy that hunger.

The soundtrack to Tron Legacy by Daft Punk received mix reviews according on who you talked to. Some fans wanted a more upbeat ‘traditional’ sounding Daft Punk album, whilst others recognised that it was a soundtrack and was perfectly paired to the scenes of the movie. As a stand alone, the unmixed version was excellent.

Now, down to the remixed version. You get the feeling that everyone who has contributed wants to be Daft Punk. There are no bad tracks on here but there are some surprises on which re imagined versions work the best. As you would imagine, both Kaskade and Paul Oakenfold turn in some high end BPM mixes that wouldn’t sound out of place in clubs. Moby’s version of The Son of Flynn is a subtle rework. He is an experienced soundtracker who scored scenes from Heat and he brings that quality sound along for this track.

The surprise stand outs of R3CONF1GUR3D for me were the Pretty Lights version of Solar Sailer, the Avicii rework of Derezzed and Fall (M83 vs Big Black Delta Remix). The tracks have taken the originals further and would not be out of place on the Tron Legacy original soundtrack. In particular, Fall is a genius reworking with vocals that works so perfectly.

If you liked the Tron Legacy soundtrack and want to fill the void until you buy the original Tron and Tron Legacy movies on DVD (Blu Ray for both is a must have) then I recommend a purchase of R3CONF1GUR3D. If you didn’t like either, I’d still give R3CONF1GUR3D a try as it might satisfy your Daft Punk cravings until they bring out a new album and eventually tour.