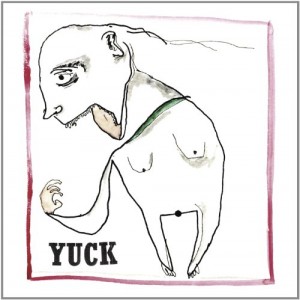 If you were given a musical recipe and the ingredients were a dash of Dinosaur Junior, a pinch of The Pixies, a splash of Belly, a spoonful of Sugar (the band not the sweetener) and a cup of The Lemonheads then you would be close to summing up the sound of the band Yuck.

Their self titled album sounds like a perfect set list of peaks and troughs in tempo and with this album Yuck have managed to teleport me back to the late 80’s & early 90’s (think back to Pump Up The Volume – Pixies Wave of Mutilation UK surf mix).

For Gen Y’ers if Yuck and this album hit some heady heights, which they so obviously will, then it may be a change in the way music has been heading. For Gen X’ers, slap on the CD and let Yuck take you back to the days when the charts were littered with Nirvana, Hole, Pixies, The Cure and Bob Mould’s days with Sugar and Hüsker Dü.

Their self titled album really does remind me of the tempo of The Lemonheads album ‘Come On Feel’. Upbeat rock tracks followed by softer, almost County guitar rock tracks.

I can’t say that every song is the best most well written tune I’ve heard but…and it’s a big but, the jigsaw pieces of each song fit perfectly together to create an album that not only keeps you listening but also makes you hungry to go back for more.

Yuck are currently touring the UK festival circuit but I’m hopeful that they will tour this side of the globe soon so that they can bring their impressive live performances out here in Australia.  If they make an appearance near your home town, get onboard as they’re on the up!!!

In the meantime, check out Yuck here: