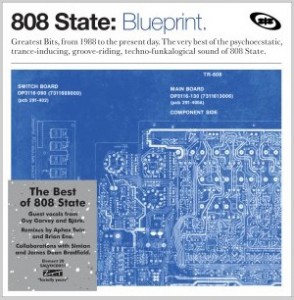 Zang Tuum Tumb and Salvo Music are proud to present Blueprint, the definitive career overview of one of the UK’s most important, pioneering and influential electronic groups: 808 State.

This is the first ever document of all eras of 808 State: from the seminally influential acid house releases on their own Creed label, to latterday collaborations with Guy Garvey and James Dean Bradfield. From their days as Haçienda DJs to headling the Manchester G-Mex, and touring the world with ‘stadium rave’ (at one point with an unknown Moby as support act).

Blueprint features the band’s top 10 singles (including Pacific, Cübik, and In Yer Face), and their groundbreaking collaborations with Björk (1991’s Qmart), Simian (2002’s 606) and Brian Eno (1996’s Lopez, with lyrics by Nicky Wire).

The whole thing kicks off with Aphex Twin‘s legendary remix of Flow Coma, one of the first ever 808 State tracks, which was released on Richard D. James‘ own Rephlex label as a 12″ promo vinyl in the early 00s.

Other remixes – all exclusive to this set – come from Trevor Horn, Jon Carter/Monkey Mafia and the mysterious 808 Tape.

Blueprint puts 808 State back on the map. Paul Hartnoll from Orbital writes the foreword to the CD’s extensive booklet, which also features contributions from The Prodigy, Doughty, Moby, Simian and Future Sound of London. There’s also an extensive archive interview with 808 State — Graham Massey (Factory Records/Biting Tongues, Sisters of Transistors), Darren Partington and Andrew Barker — by Paul Morley. Electronic instrument pioneers Roland have also pulled the original blueprints for the legendary TR-808 drum machine (from which the band took their name) out of their archives for the front cover and deluxe ‘mini vinyl’ packaging.

Two brand new tracks close out the set: Spanish Ice and Metaluna, which segues back into one of the band’s first acid house hits, Compulsion, bringing the whole story full circle. A brace of tracks have been completely re-recorded, revisited and updated by the band themselves, and they have even included the production mix of Olympic a/k/a the theme for The Word.

We are looking forward to their extensive world tour and hope that Melbourne, Australia is included on that list as we can’t wait to catch them do a set of this material.

Check them out at the official website and get this mighty compilation on order asap.