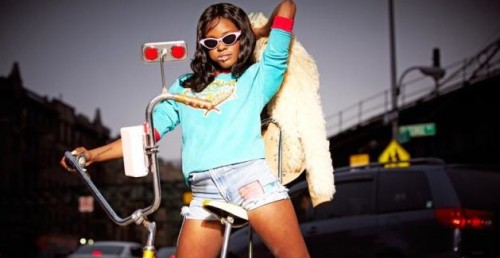 What an exciting year 2012 is going to be with artists like Azealia Banks on the horizon.  We featured Azealia and the track ‘212’ in our Watch List for 2012 at the beginning of the year and within a couple of days, Scissor Sisters announced the release of their new track featuring Azealia.

Since we heard the track ‘212’ we’ve probably played it nearly a hundred times at least, as it just begs to be put back on repeat.  It sounds like a simple track but it really is a genius track.

Yes yes, Azealia Banks might say the C word (or K word if you check out her official t-shirts) and mums and dads ain’t going to like their kids listening to artists like this but we say, who cares, when music is evolving at a fair rate. What do we mean?  Well, if you listen to ‘212’, you’ve got a blend of a thumping dance and rap formula that begs to succeed in the same way Dizzee Rascal’s ‘Tongue N Cheek’ rap/dance hybrid did.

‘212’ was released in the UK in early December after being available as a free digital download on her website and it hit 175 on the UK charts.  However, in a short space of time since then, she’s hit the top of the NME 2011 cool list, she’s been nominated in the BBC Sound of 2012 (getting into the top 5) and she is currently recording her debut album under British producer Paul Epworth (who worked on Adele’s 21).

It wouldl be rather ironic that in 2011 the most popular artist in the UK was Adele who is super squeaky clean and in 2012 it could be Azealia Banks who will more than make up for the lack of filthy tunes on the album 21.  We love filthy house rap!!! We doubt that you will be giving your gran a copy of Azealia’s album for Christmas in December 2012 anyway.  Maybe Azealia is the Anti-Adele we all need to fill our airwaves after the sugar coated 2011 of Adele’s tunes.

So….if you know of Azealia Banks already, good on you as she’s going to be a big big talent this year (well she’s always a big talent but this will be her year).  If you don’t know of Azealia, we reckon you should get into the ‘212’ track and ‘Liquorice’ below and also the many other tracks and remixes we’ve hunted down.  Check out her cover of Interpol’s ‘Slow Hands’ too.  Also, make sure you also get onto her official site here.

US by Azealia Banks

01 The Chill$ by Azealia Banks

US (PALISADEHILLSRMX) by Azealia Banks