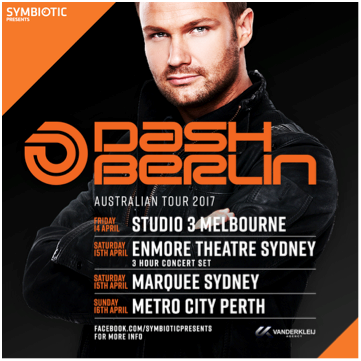 Yes sirs and madams, Dash Berlin are returning to Australia this year…in fact, in just a couple of months to Melbourne, Sydney and Perth!

If you are not familiar with Dash Berlin, they were formed when Jeffrey Sutorius (born in The Netherlands) and his close friends, Kalberg and Molijn teamed up in 2006.  Sutorius was a fan of electronic music from his high school days and in his late teens worked in a record store and became a collector of vinyl trance music.  Inspired by pioneering figures such as: Sven Vath, Oliver Lieb and Sander Kleinenberg, Sutorius began mixing and producing his own music.

Sutorius released his first record on BPM Legends records.  He started performing in the Dutch underground music scene in early ’95.  The front man of the group is the DJ Jeffrey Sutorius, the number seven most popular DJ in the world.  Molijn and Kalberg, who were DJing as Pronti & Kalmani at the time, have credited Sutorius as a vital source of inspiration for some of their biggest records during that time.

Our friendship later evolved from Jeff helping us search for the best records to play out, to actually hanging out in the studio together.  His positive energy has made all the difference.  He always brings the dance floor to the studio. Without Jeff there would have never been a Dash Berlin.

Kalberg and Molijn have been contributing to the international dance scene for 10+ years, with award-winning and platinum-selling hits for dance acts such as Alice Deejay, Vengaboys, Candee Jay, Pronti & Kalmani, and Solid Sessions. Their track “Better Off Alone” was one of the first EDM/Trance records that became big in the United States and was later sampled by French superstar DJ David Guetta and one of America’s biggest rappers Wiz Khalifa in his breakthrough record “Say Yeah.”

* The Enmore show in Sydney is a 3 hour extended concert, with show times ending at 11pm and will be a different show to the Marquee gig.

Tickets are on sale now via https://www.facebook.com/symbioticpresents for more details.