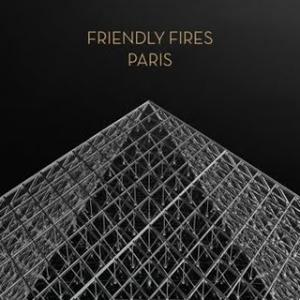 Those of you who have just entered into the wonder that is listening to Friendly Fires might have missed out on this track from a couple of years back.  The original version of Paris was featured on their 1st album and shortly after this was remixed by Aeroplane in 2009.

The story goes that Aeroplane were provided with the track segments to Paris to put the remix together and amongst the tracks were vocals of a female singer singing lyrics over the original track by Friendly Fires.  This female singer was Erika Foster from the band Au Revoir Simone and in the hands of Aeroplane, a cult remix track was born as they decided to utilise these vocal tracks in their remix.  The remix was probably one of the classics the boys from Aeroplane (who since went their separate ways) put out in 2009 and they created a classic track that also subsequently boosted Friendly Fires popularity.

I have very fond memories of seeing Aeroplane at Parklife in Melbourne in 2009 and they absolutely brought the ‘outdoor’ house down with this track.  Great days were had by all who were there!!!

So, why am I writing this in 2011 I hear you ask if this track has been buried for 2 years? Well, I’ve been scouring for unheard tracks and new talent to share with you and it turns out that with the recent release of Pala (Friendly Fires 2nd album) the remix of Paris has surfaced as a popular track online and people are hungry for more Friendly Fires classics.  In fact it has risen so fast in online popularity, I’m surprised it hasn’t got the bends.

Give it a listen below and also check out the Flight Facilities remix of this track too on my website under their post.

Both mixes are classics.