If you know me and are reading this, you’ll know I’m not a book reader. Listening to music is one of my big passions and if it is not channeling in my ears, I’m usually reading about it in a magazine or online blog format. I have now (finally) found a book that makes me want to pick it up, read it and it also ticks the boxes on all of the music passion I have.

Bill Brewster and Frank Broughton collaborated on the book ‘Last Night A DJ Saved My Life: The History of The Disc Jockey’. It was first published in 1999 and was updated and republished in 2006.

This is a well written definitive story of DJing and how the DJ and the art of DJing has evolved over the last 100 years in hip hop, reggae, disco, house, jungle and garage.

The beginnings of radio and club music is an interesting read, split across both sides of the ocean from the US to the UK and Europe.

Big news for me in this book was that the 1st club DJ (someone who initially thought of the idea of playing recorded music in a live venue for people to dance to) was not in New York, not in London but in Leeds in the north of England (my home town).

The DJ took a gramophone and wired it to a valve radio so that he could play music to the masses…well, a small venue full of people. However, this soon became popular and spread to a larger venue. It was the first time someone had attempted to do this and the concept was born.

Another interesting fact for me was that I remembered the stories my parents told me about this DJ and the nights they used to have dancing in Leeds and I then realized that they were lucky enough to witness the birth of this…it must have been in my genes from birth too as music is in my blood. Special thanks to the parents for this.

Also, did you know that the world’s first jukebox existed in 1891 and was called an Edison Automatic Phonograph? I didn’t either!!! It looked like a chest of drawers with a stethoscope type device for listening to the music. A 4ft high predecessor to an iPod (slightly bigger and heavier though).

This book is well written and each chapter moves through the history of dance, its origins and the part the DJ ‘shamen’ has played in our lives.

I highly recommend this if you want to learn about the origins and the history of the DJ and DJing. 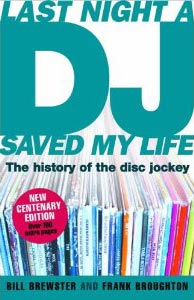