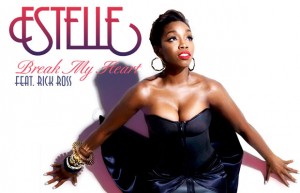 I’m filing this track in ‘Classics’ as the sound to this track is a soulful retro sound that brings some silky bass back from the late 70’s and early 80’s.  In fact, this track makes me want to dig out some Luther Vandross and play it loud.   Maybe I’ll dig out Janet Jackson’s Velvet Rope and some De La Soul too as these have that sound that I’m craving.

I’m a big fan of Estelle right back to her ‘1980’ days.  She has grown as an artist over the last 7 years since that initial album release and this track provides a taster for what is to come with her third album, since she released Shine a few years back (most memorable for her collaboration with Kanye West).

Until then, listen to and enjoy  the silky sounds of Break My Heart by Estelle Ft. Rick Ross….and if you’ve got some Luther or Janet, get that out too!!!