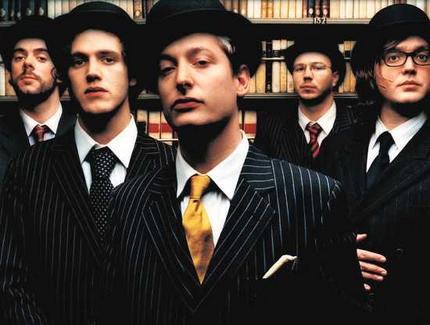 The stage lights beat down mercilessly. The sweat drips like a rapidly defrosting Icelandic glacier. The tension is palpable. All wagers have been placed and the answer for the Final Jeopardy! round is revealed. “Very” is the response. Much scrawling of light pens occurs in the next thirty seconds, until the correct question is announced. This of course is “How awesome are Gomez?”. Thank you linesmen, thank you ballboys that is the ballgame. To the victor goes the spoils, or in any case, slow moving “product” that manufacturers have no idea how they can shift, so they offload it to a TV show in the vain hope that someone will be interested in it.

Tonight was the first half of the Melbourne leg of the Quinceañera tour; a tour that is celebrating 15 years of Gomez. It was also an exercise in democracy, as the audience was given the opportunity to select the setlist. As Tom Gray a.k.a Ringo Starr, a.k.a the narrator from Thomas the Tank Engine intimated, this was a bit tricky. Kent Brockman probably said it best when he stated “I’ve said it before and I’ll say it again: democracy simply doesn’t work”. In the end I got to hear all of my favourite songs, which, let’s be honest, was the most important thing. I like to think there must have been some sort of puppet dictatorship with Smiths’ “Invisible Hand” or various dark forces skulking about, pulling all the strings in the background to make this happen. In the finest capitalist tradition, I got what I wanted and was happy whilst some people possibly didn’t, but that didn’t really matter and all was good in the world.

The first thing that you notice when you go to see Gomez is that fact that everything is completely faultless. You are left searching for a Milli Vanilli style tape deck or something else to bring down a façade of note perfect excellence. However, there isn’t one (well that I could see and God knows I tried), just five exceptional musicians. From the opener of Get Miles, it is quite clear that everyone is in fine form and desperate to give the crowd exactly what they want. In Ian Ball, Tom Gray and Ben Ottewell, Gomez has three world class vocalists, putting them on par with Sonic Youth (albeit a very different style) and three in front of Blink-182. Selling out the Bowl?! Really?! People of Melbourne, take a walk through the Hall of Mirrors and have a long hard look at yourselves. Having seen Blink-182 play live instantly cured me of the dreadful affliction of not minding them. Awful did not even begin to describe it; it managed to befoul the good name of “rubbish”. It wasn’t because their music was simple and only had 3 chords. Tonight’s support and self-proclaimed 2-chord wonders, the 8-piece Eagle and the Worm prove that this can be done exceptionally well judging by the brief glimpses of their set that I saw. It was just that Blink-182 were terrible. Actually, that is probably a disservice to terrible. Even tonight’s audience only sing-a-long (which is usually a synonym for “butchering the song”) version of Get Myself Arrested was give or take, a million times than what Blink-182 were able to produce.

From a personal perspective, the inclusion of Sweet Virginia on the setlist was a massive and extremely pleasant surprise. Tom’s voice was flawless on this beautiful track, as was Ben’s on See the World, How We Operate and Tijuana Lady and Ian on Hamoa Beach in particular. Actually the same could pretty much have been said for every other song played as well. It was difficult to pick out any individual highlights, as nothing that was played fell below the level of exceptional, but if you were to do so, Whippin’ Piccadilly, Rhythm & Blues Alibi, Silence, Win Park Slope and even Options from Whatever’s On Your Mind certainly would have been present on any such list.

Probably the busiest man was the roadie, as the switching of instruments between various members of the band was pretty much continuous. The path up to the stage would have been well worn by the end of the night as a result of wielding the bass, guitar and melodica. All this was without taking into account the difficultly in avoiding being clocked in the head by Olly Peacock’s oversized novelty cymbal which was large enough to have its own gravitational pull.

The Corner as a venue also played its part tonight. The previous time I had seen Gomez, it was supporting The Black Keys at the sprawling Palais. Whilst it was an excellent gig, it did not have the same degree of intimacy as tonight at The Corner. Gomez could have easily filled a larger venue, but not doing so turned tonight into an occasion, where every member of the audience felt that they had experienced something special.

In the end, there were only two problems with this gig. The first was that it did not compromise every single song that Gomez had ever written. It is amazing to think that in a gig of over two hours, Gomez have so much material that there was no room for Revolutionary Kind, Shot Shot, Hangover, Devil Will Ride, Notice, Catch Me Up and Girlshapedlovedrug. Yet such was the quality of songs that were played, that these weren’t really missed. The second problem really was a significant problem and it only became apparent after the gig had concluded. The problem is that Gomez have the temerity to be taking a break from touring for a bit after this tour. The nerve! I suppose it is deserved, but I really had no issue with seeing Gomez every other year…

In a year that has offered plenty of gigs by returning favourites (The Vaudeville Smash, The Herd, Florence and the Machine, The Brian Jonestown Massacre, The Rapture, Children Collide and The Beautiful Girls) and also plenty of new (Battles, Oliver Tank, Fleet Foxes, Röyksopp, Sons and Daughters, The Shins, The Dirty Three, At The Drive-In, New Order amongst others), this was the gig of the year and one that will live long in the memory.