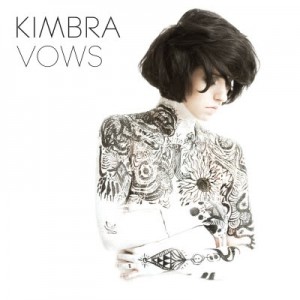 If you are a regular to Your Music Radar, since we launched in March 2011, you will be well aware of our avid following for the hot hot talent from New Zealand known as Kimbra. It’s fair to say that the time has well and truly come for Kimbra with her album Vows.

The upside to having a radar for great new bands is that you get to listen to and tell everyone how good an artist is before others have picked up on them. The downside is you have to be very very patient for releases of EPs in the build up to their album(s). You know it’s all worth the wait though.

So…yes, the day is here that Kimbra has released her hotly anticipated debut album ‘Vows’. What a year it has been for Kimbra since March 2011 when we first mentioned her to our readers and off the back of this album, the remainder of the year should definitely continue in the same way.

The year has been full of promise with the tracks Settle Down, Cameo Lover and Good Intent being released prior to the album Vows hitting stores this week and to top it all off she only featured in one of the most popular Aussie male artist tracks this year (and for a number of years) for Gotye’s ‘Somebody That I Used To Know’.

You get the feeling that with all of Kimbra’s hard work this year, the stars might just be aligning for a big pay off with her new album both in Australia, New Zealand and fingers/toes crossed for a Global smash.

If like us, you’ve been desperate for more Kimbra songs and you’ve seen her live in concert, you’ll know that this album promised to be an outstanding affair and from the word go it certainly has not disappointed.

When you have a favourite track or two that have been played live and you get to know songs from EPs, sometimes artists have a habit of ditching tracks once they’ve got an album out (think of Peter Parker’s Alter Ego by Temper Trap) but not this time. Kimbra has kept all of the quality releases and tracks she has sung at the live shows intact and she has nurtured them into even bigger blossomed tracks.

The one track in question which we were most looking forward to listening to was the track ‘Two Way Street’. If you are familiar with it you will know that this is a pretty stunning track both vocally and in composition. If you’ve been on YouTube you’ll have been able to play the Sing Sing Studios version to fill the void to the album release. However, the downfall in playing that track online is that it is a very subdued low key version in comparison to the mighty version of the track that is featured on the album.

The amazing thing with this album is that it is jam packed with tracks that could all have easily been single releases. Saying that, we think that Kimbra has kept her ace card up her sleave with the track Two Way Street as once that comes out, we believe the Kimbra avalanche will start to roll setting off a snowball effect that should take Kimbra and her band on a rocket to the stars!!!

Congratulations to Kimbra for bringing us quite possibly one of the albums of the year (although she may be locking horns with Gotye’s Making Mirrors for the accolade). Either way, we vote that Kimbra gets to sing the title track to the next James Bond film with ‘Old Flame’ and we can’t wait to see her live at Parklife this year.

We could write about this album for days but I think you might get the picture that it is superb. We should just let you get online and buy it. Alternatively, if you are like us, you can get yourself down to your local music store, you can purchase the very fine CD/DVD combo pack which has a DVD of the Sing Sing Studios session recording. It is definitely worth shelling out the extra $’s to pick this limited edition up which has a great booklet with all of the art work for the album too. Awesome!!!

Kimbra’s album ‘Vows’ is easily a 10 out of 10 and you should definitely put this on your music radar. You’d be mad not to.

In the meantime, give the track Good Intent a listen below courtesy of Vice Royalty Artist Management & Services, Melbourne on Soundcloud.

Check out all things Kimbra below:

One thought on “Kimbra – Vows”