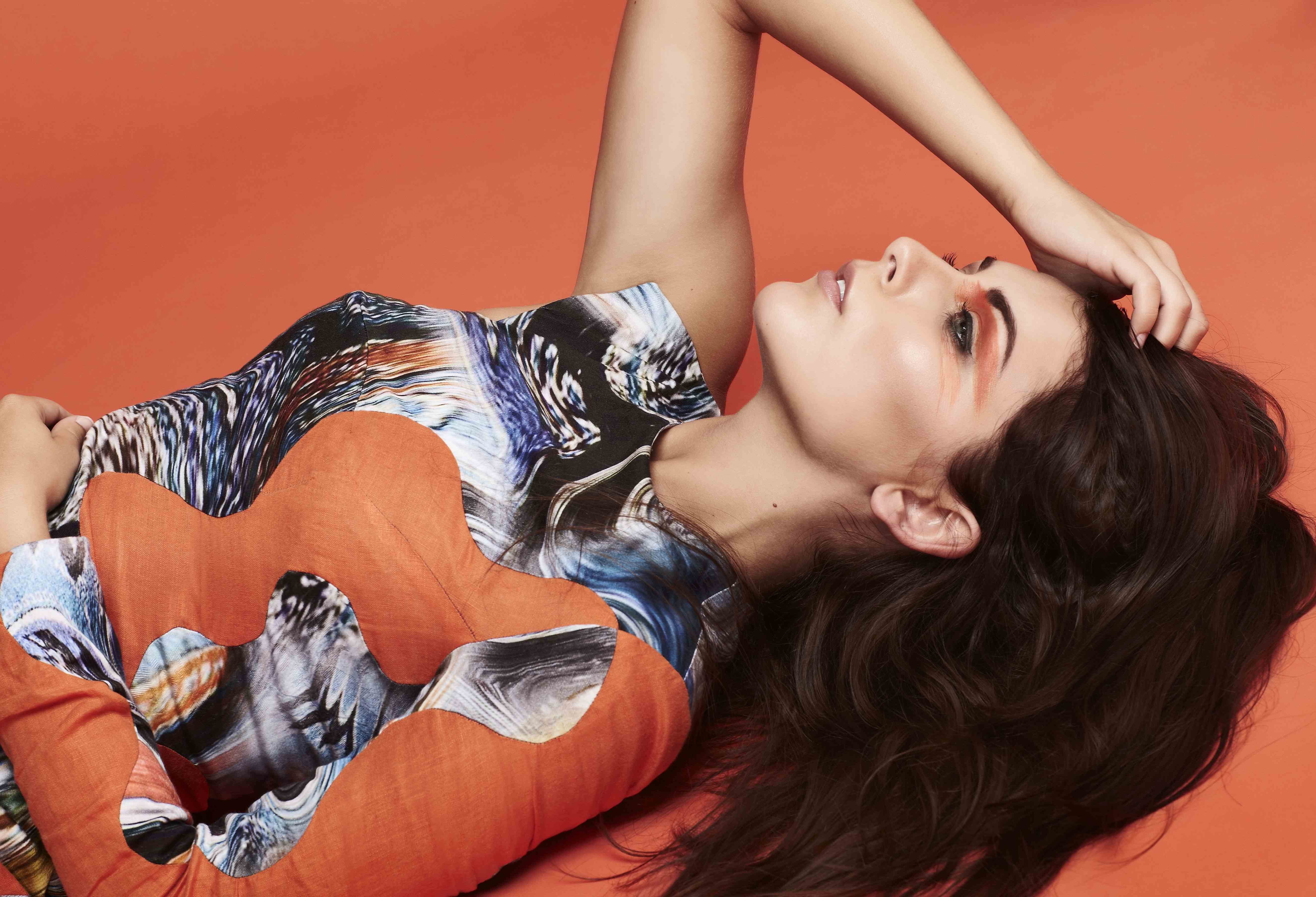 Here’s another artist that has been firmly planted on our YMR Watchlist not only just for this year but even pre YMR conception.  We’ve been tracking Brooke Addamo’s progress since the release of her Faces EP under Owl Eyes back in 2010 counting down (with patience) to this album release.

Since that first EP, she has released successive EPs each year (Raiders EP in 2011 and Crystalised EP in 2012) with accompanying tours and now it’s definitely time to unleash the debut album we’ve been waiting for.

There are artists and bands that we’ve kept track of and loved since their very early days (The Temper Trap, The Presets, Lily Allen, Katy Perry, etc.). We have dragged friends around tiny venues over the years, saying “you have to see this artist/band before they stop playing venues this size”. Owl Eyes falls into that category for sure.

We had a sneaky pre release stream and live show preview of this album a couple of weeks back and I’ve been playing this album (streaming) a lot.  To the point where I was checking iTunes the day before of the album release just in case it went up early. It didn’t, but it’s out now, so that’s ok.

I listen, therefore I am.

Before I get to what’s going on audio style here, I’ll say this.  At YMR we’ve been listening to West Coast vibe US music for the last year or so, particularly since bands and artists like St. Lucia, Goldroom, Viceroy, Ghost Beach, Blondfire, etc. have been giving me so much earjoy.  You just have to look at bands trending on Hype Machine over the last 12-18 months to see it’s clearly what’s popular.  With that sound being so prominent and with the new Daft Punk album so blatantly having a West Coast US vibe (read into it those Collaborator episodes, it so does), I can definitely say that this album slots into what is trending musically right now across the UK & US.  Is that sound what’s floating Australia’s boat right now?  We’ll catch up soon.  In the meantime, it doesn’t do you any harm in being on global trend with your album and on track with what is taking off in the US (outside of EDM).

OK.  Enough waffle.  Down to the album. After a dreamy ‘Intro’ we’re straight into the title track from the album ‘Nightswim’ which although is a completely different track to the R.E.M. classic ‘Nightswiming’ I found that it still took me to the same place in my head.  See where it takes you.  The track ‘Hurricane’ follows which is consistent territory for Owl Eyes (think Crystalised) and it leads you straight into one of the standout tracks on the album ‘Diamonds In Her Eyes’.  Is it a single? With the world of streaming now, all tracks are singles.  You decide which ones they are.  I love the lows and highs on this track.  Then we hit ‘Ivory’ and we take a different turn and this is where I feel the album steps up a gear.  A little bit of Daft Punk beat creeping in the background of this one.

Before I say how good the track ‘Golden Lies’ is, I need to make sure you are drawn into it like a tractor beam grabbing hold of the Millennium Falcon.  You can take my word for it or you can click on the link below whilst you read this.  This track is an absolute stunner.  It’s the equivalent of an audio taser.  If you could combine the best Fleetwood Mac track with Kim Carnes’ ‘Bette Davis Eyes’ you’d be in ‘Golden Lies’ territory. I’m sure it is no coincidence that this track sits perfectly midway through the album too.  So, if that wasn’t enough, we then drop straight into ‘Open Up’ which really reminds me of the Truth Remix of Kylie Minogue’s track ‘Confide In Me’.  That mix that was so stripped back it had around 4 to 5 layered tracks on it (serious eargold) and this one is very close to that awesomeness.  It’s a track too that again is in definite Disclosure territory.  In fact, this is the equivalent of the UK’s Jessie Ware.  Owl Eyes could in fact be the Australian artist that could easily translate across the pond.

The track ‘Find Out’ is in St. Lucia territory without a doubt.  Which comes as no surprise as the producer of this album (Styalz Fuego) has had his fingers in the St. Lucia pie with their track with The Knocks.   Keeping in the theme of Disclosure type tracks ‘Saltwater’ keeps the low fi beats continuing and it carries you into the album release ‘Closure’ which is another track destined for the Triple J Hottest 100 at the end of the year.  Check out the new video below.

And then that’s it.  We’re into the stunner track ‘Jewels & Sapphires’ which is the album closer.  Again, it’s another track that is so on trend with what is being soaked up audiowise from artists like Giraffage, Disclosure, Flume and many others at the moment.

If you’ve bought the album early, there’s a bonus track ‘Love Run Dry’ which was a track that came out prior to the album release.  It might be an ‘extra track’ on the album but it definitely fits in with the whole album journey and doesn’t sound like it has been tacked onto the end as an after thought.  In fact, the more tracks on this album the better.  It is perfectly timed, has the right amount of tracks and makes you want to dive straight back in for a repeat performance.

So. In short.  It’s a quality album.  It’s eargold.  There’s not many strong female Australian artists kicking it on over the ocean from Australia (Emma Louise, Washington and Missy Higgins).  In fact, there’s not a massive amount of prominent female artists in general going great guns at the moment.  I’m hoping that Owl Eyes knocks that trend for six and seriously steps it up a gear for female artists being represented from Australia overseas and on home turf.

If you have the opportunity to catch Owl Eyes live on her forthcoming tour, we recommend you do it (dates below).  Like we said at the start, we love following artists and bands around when they are playing smaller venues and you know that they’re not going to be doing it for much longer (Tame Impala at Festival Hall anyone?).  Get onboard the Owl Eyes journey. You won’t regret it. It’s only a matter of time before things go global on this one. 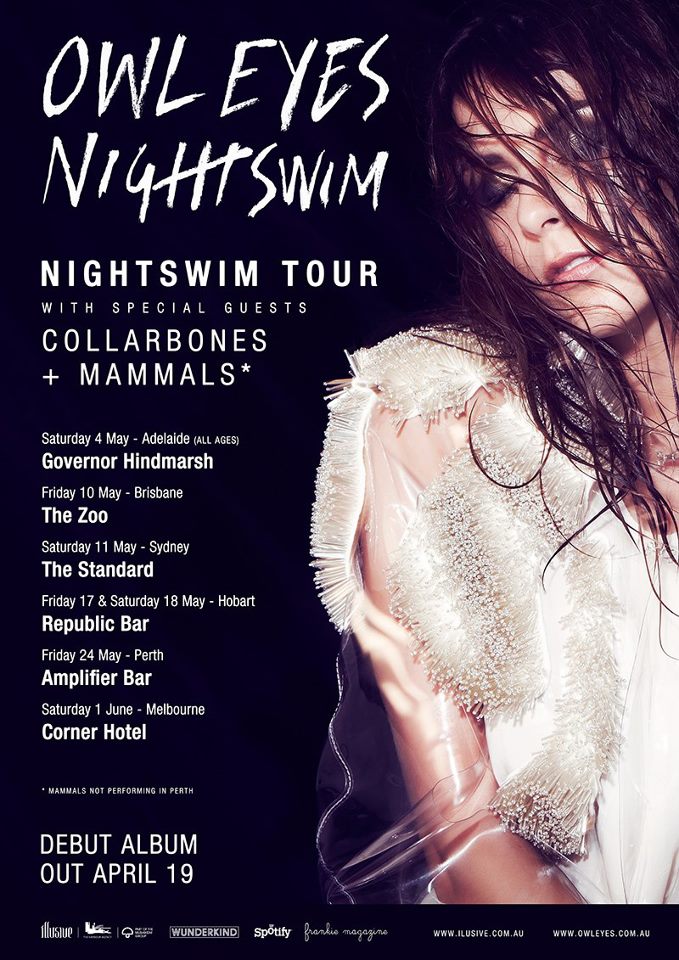