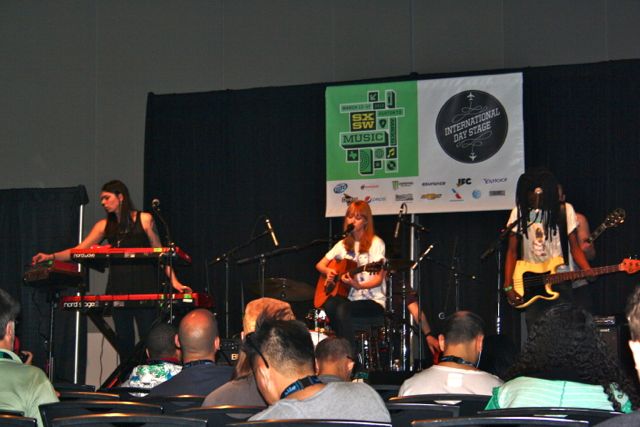 Awesome.  A year goes by quickly since we were in the Ballroom at SXSW last year watch Voltaire Twins, Alabama Shakes and Michael Kiwanuka on stage in the Austin Convention Centre where no one really knew they were playing.

Well, we’re doing it again today with Lucy Rose (and Jake Bugg a little later at the Radio Day Stage ).  We’ve been following Lucy Rose for a little while now and to catch her in such an intimate venue is quite awesome.  The numbers are getting a little bigger as she plays each track but it must be quite weird for the UK sensation to be playing a smaller quite ‘quiet’ audience.

She played a 40 minute set with a full band (we were expecting an acoustic set) so this was a mighty bonus.  Every track was flawlessly performed, including some up and coming fresh new tracks that have only just been written whilst on her European tour.

Lucy Rose is in town until the SXSW festival finishes and if you’re reading this and haven’t caught her yet, make sure you get on board the Lucy Rose rocket at SXSW.  She’s going to be one of the buzz bands and artists when this festival finishes.