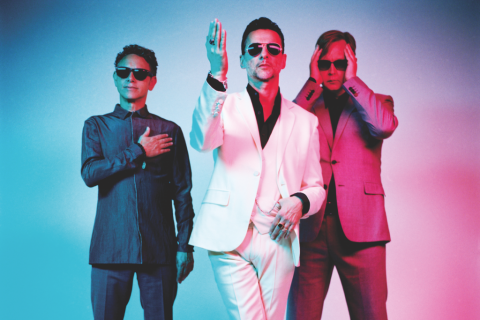 Only another two days until SXSW music starts.  Depeche Mode have been announced as a performing band (although you have to enter the draw/ballot for a chance to get a ticket).  It made sense that they would be playing as they’re also in town for a SXSW interview at the Austin Convention Centre.

Presented by Yahoo! the exclusive show will take place at Austin’s Brazos Hall with Depeche Mode scheduled to take the stage at 10pm

Depeche Mode are nearly ready to unleash their new album Delta Machine on us all and their performance is going to be one of the first opportunities for the public to hear the new tracks that they’ve been working on.  The band’s new album, was recorded over the last year in Santa Barbara, California and New York City and was produced by Ben Hillier and mixed by Flood.

Of course we’ve entered all of the ballots again this year and we definitely didn’t want to miss out on a chance of this surprise SXSW addition.  We picked up a ticket for Bruce Springsteen last time around through the same ballot, so we may as well give it another go right?

Check out the video to their new track ‘Heaven’ and get a load of Depeche Mode at SXSW if you’re in town.