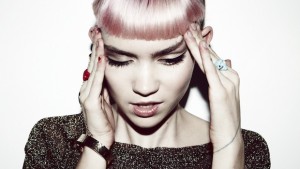 What a week it is turning out to be.  We caught Grimes at the Live From The Loft ‘Google Play and YouTube’ stage yesterday to catch an up and coming star.  We had high hopes for this one and it did not disappoint.

There was something extraordinary and quite special about this band today.  I don’t know whether it was the circa. mid 80’s outfit that wouldn’t have looked out of place in a Rosanna Arquette movie or if it was the breeze and stage setting that reminded us of the live aid set by Madonna when she was just an up and coming starlet. Either way, Grimes is not only exceptional on record but also quite amazing live.

With all the gigs we have been seeing this week, you’d think that we would not be interested in seeing any of these bands again when we’ve already caught them but we reckon when Grimes hits Melbourne, either late in 2012 or early 2013, we will definitely be catching that one.

Even better that the closing track from the gig was an extended version of ‘Genesis’ which is one of our favourite tracks ever and it certainly didn’t disappoint the crowd.

Check out all things Grimes here and have a sampler listen below to her track: