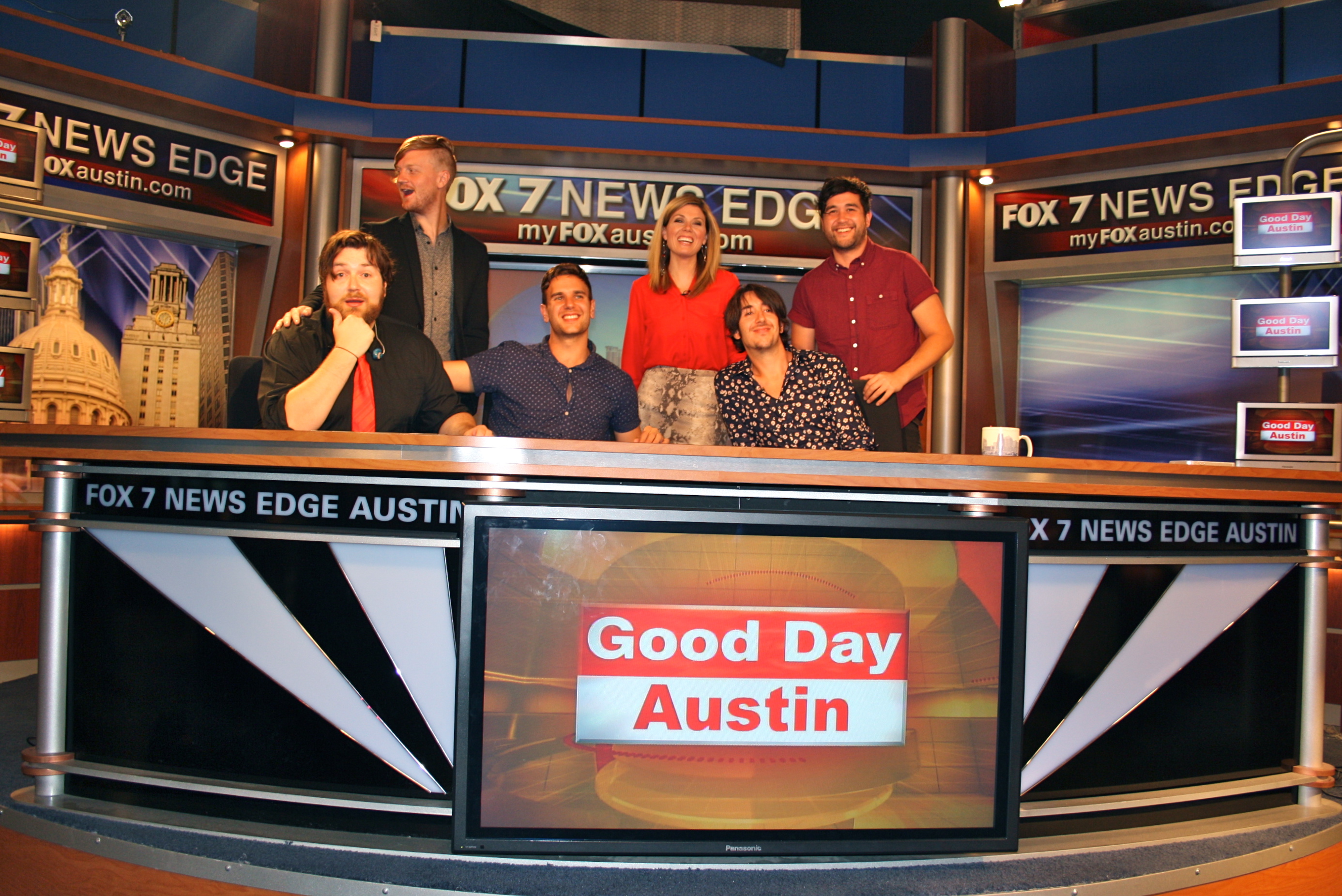 When Melbourne’s Vaudeville Smash hit Austin in March for SXSW they were invited to perform on Fox 7’s Good Day Austin (the equivalent of Australia’s Sunrise on Channel 7) and we caught up with the band to shoot them at the TV studios.

They were in good company as the guest slot prior to their performance was an interview with Nightmare on Elm street creator Wes Craven. Whilst the studio wasn’t huge, what you don’t realise until you get there is that a performing band getting ready for their slot has to basically creep around making as little noise as possible so that it doesn’t get picked up on live tv whilst the newsreaders, weather presenters and TV presenters are doing their thing. That is of course until you hit commercial break time when all hell can break loose and the band can break loose, warm up and get their kit together (in 5 minute bursts of noise and the TV sound guy gives you nod to go into stealth mode) and find time to throw an NFL ball around the studio. 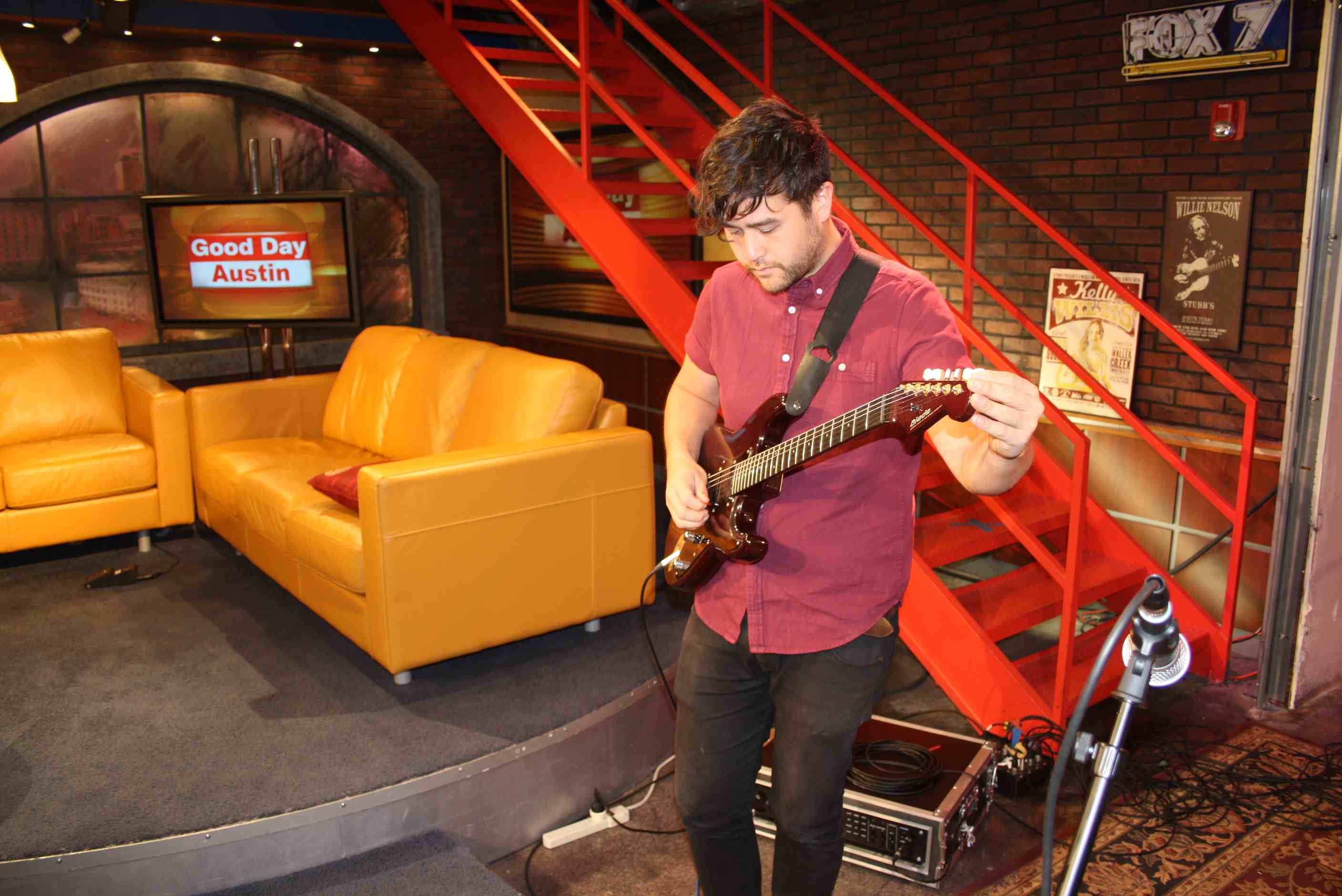 The guys had the chance to chat to the TV presenter and big up their gigs in Houston and Austin followed by a performance of their sensational album track ‘Dancing For The Girl’. It was greet to see the performance in the studio as you could tell the staff and presenters were into the summer chill sound for the morning’s show. 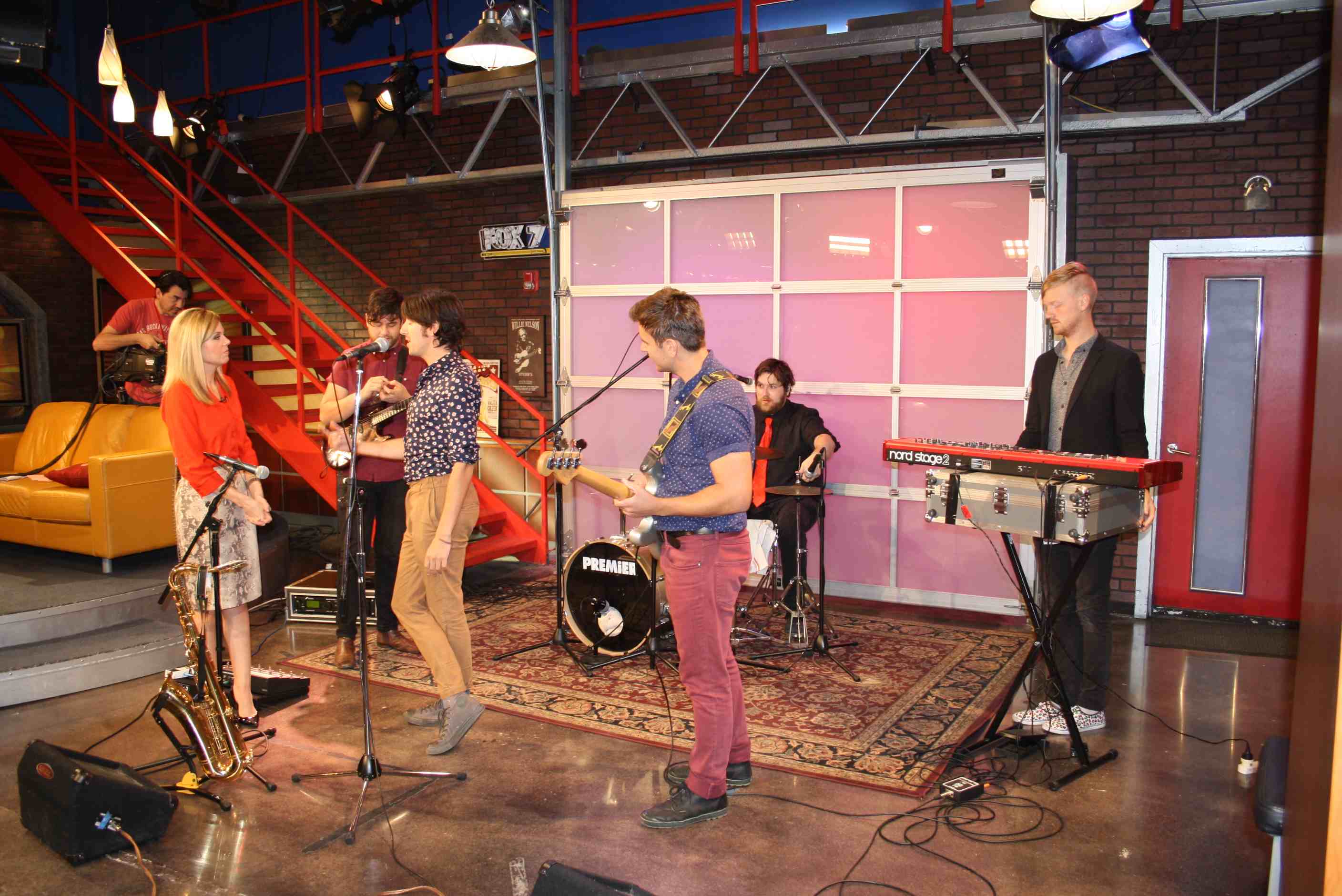 As we were at the Fox 7 studios, we also had another YMR member take some piccies of what was happening on the other side of the camera at the TV end at the hotel. Not bad work getting your band on TV, getting your single promoted and getting your showcases plugged to a massive audience. 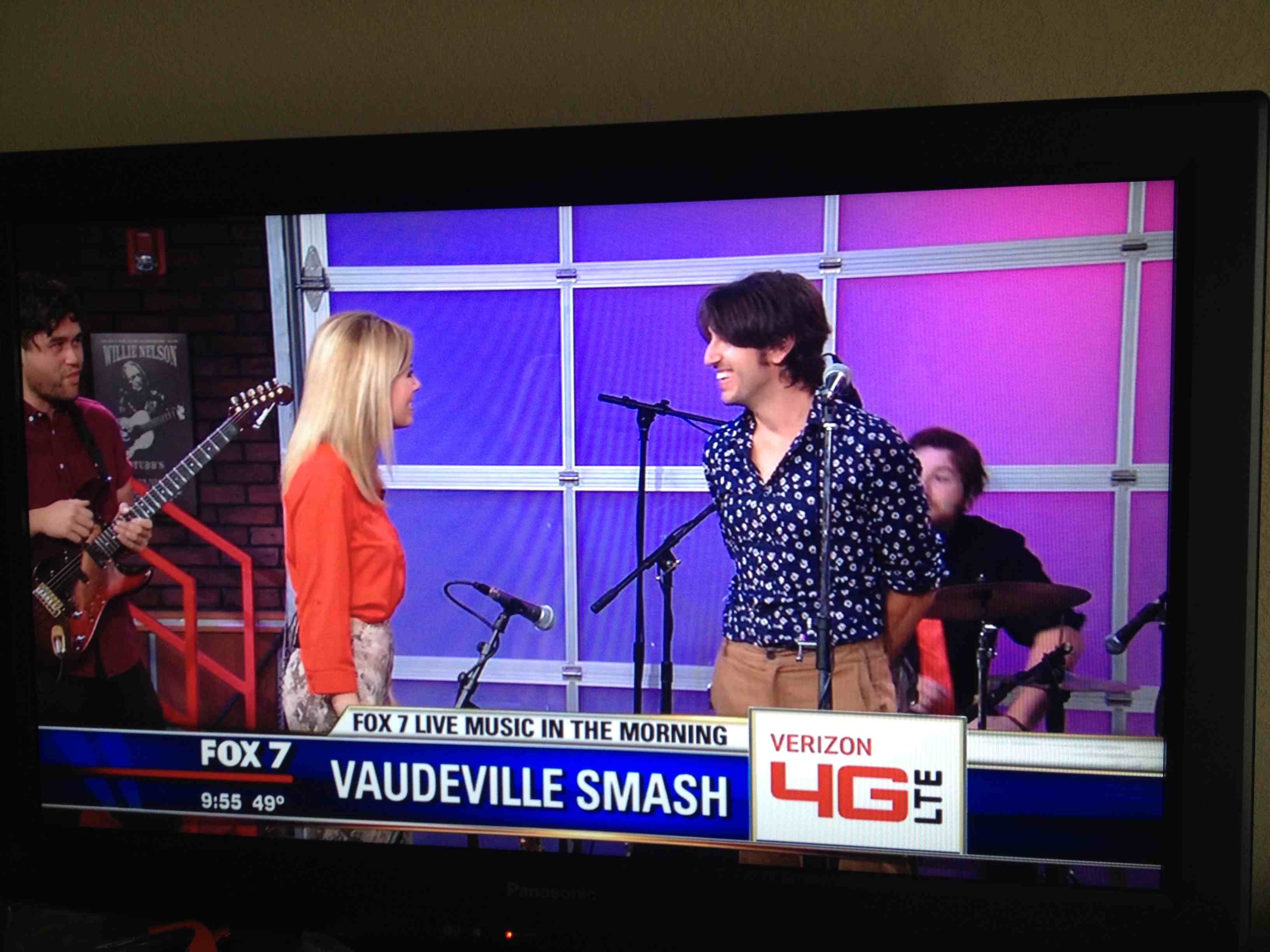 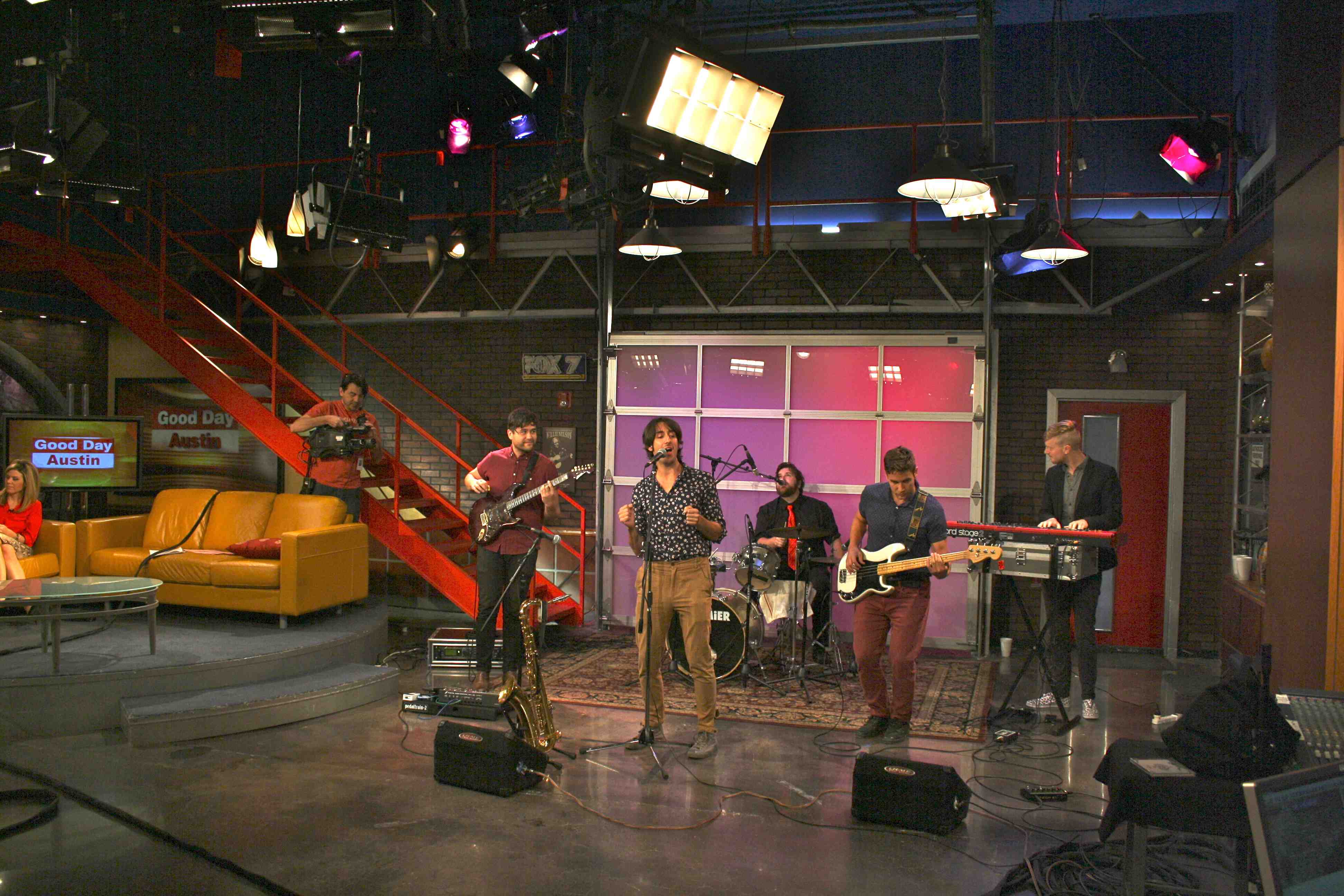 Check out their performance clip of ‘Dancing For The Girl’ HERE which is set to feature on their forthcoming album.


Vaudeville Smash are set to drop their new single and forthcoming album very soon. We will keep you posted on all things VS related as and when it happens. In the meantime, get streaming the film clip, check out their recent single ‘Look At Me’ and one of their older classic tracks ‘Doris Winter’.