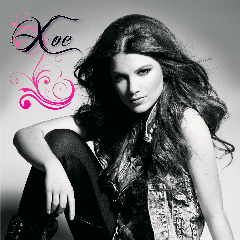 Xoe is being developed by Warner Bros. Records in the US at the moment and she’s just finished her demo album with a Grammy Award winning producer.  Listening to the tracks so far that we’ve linked below from her site, it’s fair to say that we’ve got a potential challenger for Ke$ha’s and Britney Spears’ crowns on our hands here (with a little bit of Kelly Clarkson’s crown thrown in for good measure).

Her first music video for ‘Stuck On Repeat’ has just been released and we definitely want one of those pink top loading washing machines.  It’s a great track that you quite literally want to stick on a repeat spin cycle.  It reminds us a little of the track ‘Move For Me’ by Kaskade featuring Haley.

Top tip tracks that you should also give a listen to are ‘Stuck On Repeat’, ‘Getaway’ and ‘Mischief’.  More catchier tracks than ever!!!

Check out the tracks and the video below and get on Xoe’s official site, Facebook and Twitter here.

How’d You Get So Hot

4 thoughts on “Xoe – Stuck On Repeat”