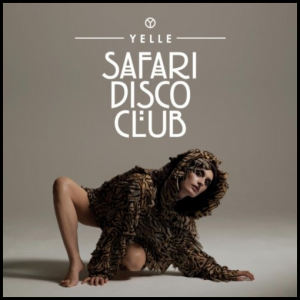 Imagine if you could bottle up the feeling of happiness and sell it? Imagine if sadness was a disease? If it was, then Yelle would be the vaccine as one listen of this album will have your happy endorphins working overtime.

I’ll be honest and say that I only understand a little French but that doesn’t mean a jot when you’re listening to this album by Yelle as the vibe and feeling pulsate from the speakers on Safari Disco Club like there is no tomorrow.

As I’ve said above, this album just eminates happy feelings and when I listened to the track ‘Que veux-tu’ it just made me think of those happy moments in your life that you experience.

Listening to this album has already made me question which Splendour in the Grass sideshow I’m going to go to now. I’d originally intended to go to the Kaiser Chiefs sideshow on Fri 5th August. However, although I knew that Yelle were also playing that night, it didn’t cross my mind that I would not be going to see the Kaiser Chiefs. Listening to this album now has made me reconsider my choices.

I’m going to have a Safari Disco Club’athon this weekend and then make my mind up on the live show I’m going to see…Hmm, choices, choices.

In the meantime, have a little listen to ‘Que veux-tu’ and their other tracks below and see if you can decide who you would go see too…

Bring on those happy en-dolphin-lundgrens!!!