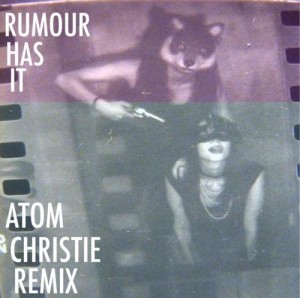 Everyone is hungry for Adele mixes at the moment and we area no exception.  The difference with this track is that the Atom Christie remix is very very creative and hasn’t just gone for a remix touch but more of a reworking of the track.  An exceptional dubstep version in fact.

Adele was forced to reject performing with Beyonce at Glastonbury last week as she was ill with laryngitis and unable to show.  ‘Rumour has it’ that she isn’t keen on playing large crowds due to her extreme panic attacks and that was the real reason for not performing.

Check out the Atom Christie remix of Adele’s Rumour Has It below: