Linda Bull and Sime Nugent get together with their fabulous band, singing songs of Willie Nelson. No whiff of ganga in the air, but fabulous music nonetheless!

If it wasn’t for the renonwned blues singer Chris Wilson, this show might never have happened. It was Chris Wilson that suggested that Linda Bull should do this show, indicating that her voice would suit the songs of Willie Nelson. If Chris wasn’t so ill, he would have been part of the show. Linda wasn’t too sure if the show should go ahead without him. Though luckily for us, the show did, with Sime Nugent filling the role.

There is a good audience tonight, with the majority of the audience being of a certain age that might have voted for Gough Whitlam. But that’s okay, I love Gough! The lighting is understated and beautiful with sparkling lights over a blue hue, reminiscent of Nelson’s landmark 1978 album cover that is in the title of the show – Stardust. 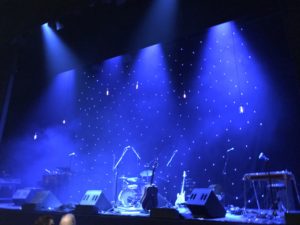 The band consists of everybody’s favourite drummer, Peter Luscombe, Cameron Bruce on keyboards and playing the wonderful melodeon, Bill McDonald on bass, and the highlight – Shane Reilly on pedal steel guitar – a sound that provides poignant musical punctuation wrapped in an emotive peak. Linda and Sime share vocals, with the latter playing a mean harmonica and guitar.

Willie once said “I’m a country songwriter and we write cry-in-your-beer songs” – of course, he is more than that.  Linda Bull’s voice fluidly envelops the music of Willie Nelson – she should really tackle a country album – from the optimism of “Blue Skies”,  to the soul of “Georgia on My Mind”, and the most convincing interpretation of “Always on my Mind”. The latter giving me goosebumps, and Linda’s voice ringing like a bell in the auditorium. Linda sang this song like she felt it. I wonder if she had someone in mind?

Linda Bull is more of a seemingly natural performer than Sime. Linda moving, gyrating and engaging the audience, with Sime being more aloof. With such a sexy song like Kris Kristofferson’s “Help Me Make it Through the Night”, I was hoping that Sime would look at Linda and feel the song. Though it didn’t happen. This engagement aspect was a small gripe and secondary to the music and the performances. Sime sounds like Willie Nelson. In some instances, Sime was Willie Nelson without the bandana and whiffs of joint smoke in the air! As the show progressed the confidence of all the players increased – this was the opening show after all – and then pow! With “Mammas Don’t Let Your Babies Grow Up to Be Cowboys” there was finally real engagement between Linda and Sime, which made the song feel so real!

The musicians were tight, pushing their weight and providing a beautiful soundscape to the songs of Willie (and to the songs that Willie has interpreted). An exceedingly enjoyable evening – Chris was right Linda, these songs do suit your voice. And make sure you record an album of country music – after the long awaited Vika & Linda album of course!