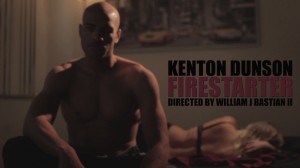 Kenton Dunson has released his debut music video ‘Firestarter’ from his critically acclaimed album Creative Destruction 2. If you thought the track was good and the album was good, then you’ve got to see this exclusive video.

‘Firestarter’ is the lead single from his Creative Destruction 2 free album, which has garnered over 100,000 downloads as well as critical acclaim from music blogs across the web.

The music video tells the story of two lovers who share a chemistry that very few experience yet lack the maturity and honesty to properly handle the emotions that come with it. Set to the backdrop of Venice Beach, CA, this is the story of a love gone wrong and the realization that, sometimes, the person you loved the most is merely just a stranger in bed next to you.

The song itself was based on one of Kenton’s own experiences. He has always been intrigued by the term “Firestarter” but it wasn’t until he dated a serial heart breaker, that it actually meant something to him.

In his own words:

“She was blazing a mean trail! Eventually she must have realized her faults because she later apologized saying she didn’t mean any harm but honestly, when does that ever help? I’m actually good friends with her today so my goal is not to put that individual on blast but as you progress as a songwriter, you absolutely must allow yourself to express true emotion whether the subject is sensitive or not.”

With his own experiences at the heart of the song, the song came together very quick starting at the piano and a hook that he sang in falsetto with Ryan Kellie in mind to sing it. Ryan is a singer/songwriter who previously spent a lot of time in the Nashville music scene. Kenton wrote piano parts to a few of her songs, so together they have a natural working relationship that turned out perfectly in “Firestarter”.

Within the next couple of months, Phoenix Is Burning will release a short film entitled Firestarter inspired by Kenton Dunson’s music and contains scenes previewed in the “Firestarter” music video.

Check out the video here and the track Firestarter below: