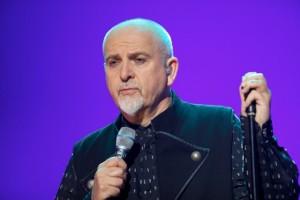 “The orchestra provides different dimensions to the music that weren’t there initially. Rock artists work slowly in studios, building up layer by layer, and one of the great, powerful advantages of an orchestra is all these musicians playing at one moment with all sorts of colors and personalities.” – PETER GABRIEL

On the heels of a limited sold-out US summer tour that earned Peter Gabriel some of the best reviews of his career, he will release a full-length CD NEW BLOOD on October 11, 2011 distributed by EMI. A continuum to his recent Scratch My Back release, the NEW BLOOD album will feature some of Gabriel’s biggest hits from his prodigious career, reconstructed and re-imagined with orchestral arrangements and recorded live with the New Blood Orchestra. Gabriel hand-selected the songs and enlisted the help of longtime collaborator John Metcalfe for the arrangements and Ben Foster as conductor of the 46-piece New Blood Orchestra.

This treatment is applied with painstaking attention to detail and stunning effect to songs including “Mercy Street”, “Don’t Give Up”, “Digging In The Dirt”, “San Jacinto”, and the all-time classic “Solsbury Hill”. The intention was not to simply rework Gabriel’s biggest songs, but rather, find songs that were enhanced by the massed strings, brass, woodwind and percussion. “Don’t Give Up” – now with Norwegian singer Ane Brun’s vulnerable, cracking vocals replacing those of Kate Bush – rides a stirring, uplifting coda. Where the twinkle of “San Jacinto” was originally supplied by loops from a Fairlight sampler, piano and bows now provide the otherworldly magic. But probably the most extraordinary reinterpretation is that of “Rhythm Of The Heat” where Metcalf has recast the original’s extended African drum jam into a dizzying, swirling orchestral maelstrom.

NEW BLOOD will be available as a standard single-disc and digital download. A special 2-CD version will include the standard album plus an added disc of instrument versions. There will additionally be a heavyweight vinyl version available November 8th that is released with a bonus 7″ featuring “A Quiet Moment” and “Solsbury Hill”). The filmed concert “New Blood – Live in London”, recorded October 23rd, 2010 at the Hammersmith Apollo will be available in 3D, blu-ray and standard DVD on October 25th.

Pre-order your own copy of NEW BLOOD now:

PETER GABRIEL BIO
Peter Gabriel first came to international prominence with the success of Genesis, a band that he co-founded while still at school. Since leaving Genesis in 1975, his recording career has included seven studio albums, acclaimed film soundtracks for ‘Birdy’, ‘The Last Temptation of Christ’ and ‘Rabbit Proof Fence’ as well as live and compilation albums. His wider musical career has included multiple Grammy Awards and the creation of the now global WOMAD festival.

Peter Gabriel co-founded the human rights organisation Witness.org in 1989 and in 2007, Peter and Sir Richard Branson founded Elders.org which was launched byNelson Mandela. In 2006, he was awarded the prestigious Man of Peace title by The Nobel Peace Laureates. Peter Gabriel has also engaged in a wide variety of tech-based businesses throughout a variety of creative industries.