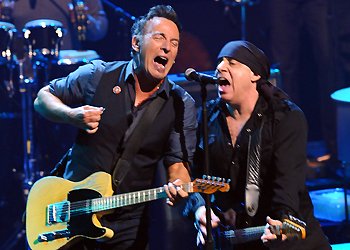 Well, as they say, if you don’t shoot you don’t score!!! That was our motto when we were notified we won a ballot/ticket to catch the SXSW performance of Bruce Springsteen & The E Street Band. What a SXSW it has been.
It had been an epic day in the life of Your Music Radar and to top it off with a gig by The Boss….in an intimate venue…it doesn’t get much better than that.

It was a mixed bag in the queuing stakes. Orderly fashion in some areas and in others it was all crazy like. Crazier though that there were a lot of empty seats too in the balcony areas. I had my seat though and I was there for the duration.

So….the gig with Bruce!!!  Well, it would be predictable to say it was epic in every way but that is exactly what it was. EPIC!!! Particularly as it was up close and personal too.

There’s been a lot of great publicity on the new ‘Wrecking Ball’ album and this was our first acquaintance with the tracks but it definitely will not be the last.

Were there any big ones played? You betcha there were!!!  Tracks such as Badlands, The Rising, Thunder Road, The E Street Shuffle were absolute crowd pleasers and  so so good!!!!  Not as good though as have Tom Morello from Rage Against The Machine guest, Jimmy Cliff and then finishing off the night with a special appearance from Arcade Fire.

This might go down as a definite top 10 of a gig for us, which after everything we have experienced at SXSW this week is a big statement!! Especially as we also caught Arctic Monkeys & The Black Keys at MSG this week too.

Life is good and music is awesome in Austin. The Boss and SXSW rocked!!!   If you are looking at picking up tickets to any of the up and coming tour, we recommend you get those tickets and if they cost a little more than you’d normally pay, you will definitely be rewarded!!!